In April 2006 remember receiving a call from Johnny Sample’s friend, basketball legend and youth advocate Sonny Hill.  There was bad news as it related to the death of my friend Johnny Sample.  It reminded me of a recent conversation I had with Coach Clarence Bighouse Gaines’ wife Clara.  She said, “Harold I never thought Gaines would die.”  It was eerie because I had that same feeling about Johnny Sample, even though I knew better.

He was known to his friends as Happy, Blade, Reds, and Redball.  He died suddenly in his hometown of Philadelphia, he was 69 years old.

I had just spoken with Johnny before heading south to the memorial service for “Bighouse.”  He said he was going to try to make it, but I didn’t look for him.  Johnny was notorious for not showing up.  I have heard all the stories but I don’t ever remember him giving me his word and not keeping it.

He was always there for all of my celebrity tennis tournaments, media panel discussions, award programs, radio and television talk shows, etc.  Compared to today’s pro athlete, he was a Saint.

I first saw Johnny Sample in Washington, DC in 1954.  He was a member of the Maryland State football team and they were in town to play Howard University at the Cardozo High School football stadium.

I was amazed that he didn’t wear thigh and knee pads; he worn his pants, skin tight.  The shoulder pads were so small it didn’t look like he had any on.  His level of play that day was like a Man among boys.

Howard University was no match for Johnny Sample and his teammates.  It was here that I came away with the impression that Johnny Sample was indestructible.  It would be years later before I would meet Johnny face to face.  It was at a Baltimore Bullets’ (Wizards) basketball game at the Baltimore Civic Center.

He was a member of the Baltimore Colts football team.  He was standing around outside of the bar during halftime laughing and talking with anyone and everyone.  I decided to go up and introduce myself, and we have been great friends ever since.

Michael Cooper is one the greatest running backs to ever come out of the Philadelphia public school system. He was one of Johnny’s closest friends.  He played at North East high school and Michigan State.

Michael remembers when he was invited to the Washington Redskin camp in 1964 for a try out by then Coach Bill McPeak.

It looked as though Michael was a sure bet to make the team until one day Coach McPeak decided it best he go on the Redskin taxi squad.

Johnny disagreed with the coach’s decision and let him know in no uncertain terms.  He would run through a brick wall if you were his friend.  Michael recalls his many acts of kindness for his friends.  He says, “Johnny Sample was not a fly by night friend, if you needed him, he was there.”

When his friend and teammate the legendary ‘Big Daddy’ Lipscomb was mysteriously found dead in Baltimore, the NFL claimed he died of an overdose of drugs.  Johnny knew for a fact ‘Big Daddy’ didn’t do drugs.  He said, ‘Big Daddy was scared to death of needles.’

He sued the NFL for $100,000 to clear his friend’s name and won the battle.  Johnny would lose the war NFL Commissioner Pete Rozelle declared on him.

Coming out of Maryland State College, he was one the greatest running backs in the nation.  In 1955, he was voted unanimously by The Pigskin Club of Washington, DC as its “Player of the Year” for the Central Inter-collegian Athletic Association (CIAA).

His NFL career would be controversial, but his athletic skills were never questioned.  His mouth often got him into trouble, but his play on the field would often be his ticket out of the NFL doghouse.

During his 11-year NFL tenure he was one of the most feared defensive backs in pro football.  Roy Jefferson a former teammate and All-Pro wide receiver says, “If you caught the football in his territory you were going to pay the price.”

Hall of Fame All-Pro wide receiver Frank Gifford of the New York Giants was so fearful that he once saw Johnny on a New York street corner and ran to the other side against a red light to get away from him.

Johnny made “The Bump and Run” against NFL wide receivers a art form.   He would hold some All-Pro receivers to no catches for an entire game.

The Baltimore Colts, Pittsburgh Steelers, Washington Redskins and the New York Jets were all NFL homes for Johnny Sample.  He earned two championship rings and one Super Bowl ring.

In 1969 Johnny walked away from the game that he loved.  He was much more than a great athlete he was a student of the game.  Johnny could disrupt the flow of a game by calling out the offensive play as the opposing team came out to line up.

The QB would immediately call a timeout and cuss Johnny out as he made his way to the sideline.  There were many who thought he would have been a great NFL coach, but he had burned too many NFL bridges.

Immediately after retirement he went to work on his first novel, “Confessions of a Dirty Football Player.”  This book outlined the mercenary world of professional football.  In an interview on my television sports talk show Round Table “Legends of Inside Sports” Jim Brown asked the question, ‘Johnny were you a dirty football player or just a hard clean player?’

His response, ‘I was never dirty, except when I played against you.’  The NFL Roundtable panel included, Roy Jefferson (Washington Redskins), Willie Wood (Green Bay Packers), and JB Brown (Miami Dolphins) all they could do was laugh along with Jim. 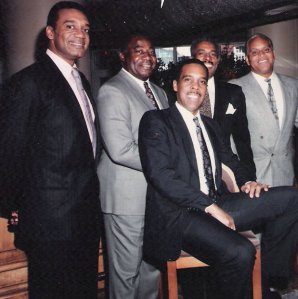 Johnny was not one to just sit around after his NFL career.  He became an entrepreneur and owned a ticket agency and sporting goods store called, Sample’s End Zone.  He later taught himself the game of tennis and quickly excelled. 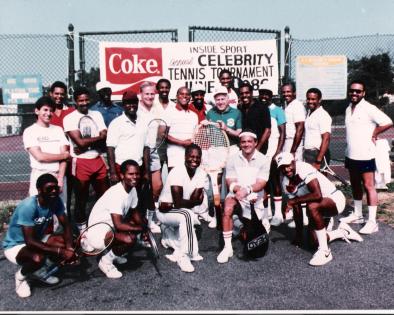 Jim Bad News Barnes (NBA) and Johnny pose for the camera at my Inside Sports Celebrity Tennis Tournament in Anacostia Park in SE DC and shares a Big racket with NBA legend Red Auerbach and me at another Celebrity tournament at Bannecker Rec Center in NW DC. JOHNNJ 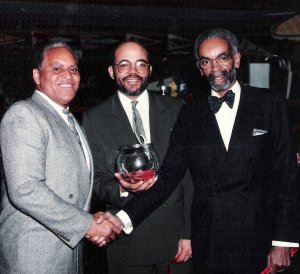 He was the No. 1 player in the country in the United States Tennis (USTA), 45 and over category for several years running.  He would later serve as a tennis official for the USTA, Wimbledon, US, French and Australian Opens and chair umpire, linesman and referee for the USTA.

His inner-city youth tennis program was one of the largest and best run in the country. Tennis to him was all about, love, love and more love.

In February of 2004, he was inducted into the CIAA Hall of Fame in Raleigh, NC.  This was almost 50 years after he had graduated from college.  The first question he asked when he took the microphone, “CIAA what took you so long?”

Johnny Sample’s induction into the Hall of Fame could not have come at a better time.  In this case better late than never.  This was definitely a highlight in his long distinguishing odyssey into the world of politics and sports.

During his induction speech he asked me to stand up and be recognized as the pioneer in sports talk radio.  He was always reaching and giving something back.  Johnny also excelled as a sports talk show host on W-H-A-T Radio in Philadelphia from 1988 to 2004.  Johnny used his sports talk show as a vehicle to improve the growth of his community.  He never forgot I suggested he should have his own sports talk show in Philly.

As a community advocate, he was instrumental in several projects.

The crown jewel was the Million Man March in 1986 when he organized seventy-three buses from Philadelphia and parts of New Jersey to Washington, DC.  In my world he was a special man.

John B. Sample Jr. was born and raised in Portsmouth, VA where he was an  all around high school athlete. He played his college football at Maryland-Eastern Shore.  He was an All-American running back and was the first black athlete from a HBC to be named to the College All-Star football team.  The annual game was played in Chicago against the NFL Champions.

Johnny Sample was a student of the game when it came to football. He would have been a great coach on any level.

He played for the Colts in the 1958 NFL championship game against the New York Giants that is still often described as “The Greatest Game Ever Played.” The Colts won 23-17, the first game to go to overtime.

In 1969 he was all over the field in that historical game against his former team, the Baltimore Colts. It was like he was in the huddle when the plays were being called.  He had an interception in that 16-7 upset it was the third Super Bowl. That was the game Jets’ QB Joe Namath, “guaranteed” victory.  The game established the old AFL on a par with the NFL after the two leagues had merged. He was also a co-captain along with Namath.

“He will always have a special place in Jets’ history as a member of the Super Bowl championship team,” Jets coach Herman Edwards said. “The Jets and the NFL community have lost a friend in Johnny Sample.”

In all, Sample played 11 seasons for the Colts, Pittsburgh Steelers, Washington Redskins and the Jets. It is rather ironic, the 1958 title game he was a rookie and the 1969 title game was his last—both were championship years.  He came into the league as a winner and he went out a winner.

“His participation in two of the most significant games in NFL history, the 1958 championship game and Super Bowl III, symbolized the champion John was,” Colts owner Jimmy Irsay said.

Known as a fierce hitter from his cornerback position, he had 41 interceptions during his career, returning four for touchdowns, and also returned one punt and one kickoff for a TD. In his final year with the Jets, he had seven interceptions.

Sonny Hill, a longtime friend of Sample’s who runs a basketball league in Philadelphia, said he thinks Sample belongs in the Hall of Fame.

But what was more important to his friend, Hill said, was standing up to injustices such as racism.

“Some tolerated it and went along with whatever, but Johnny would not tolerate it,” Hill said. “He was a man’s man.”

I was pleased to see my name in the program as an Honorary Pallbearer for the great Johnny Sample.  “Redball” it was my honor.  Johnny Sample is gone, but he is not forgotten.