In 1967 I first met Muhammad Ali on the campus of Howard University with hundreds of students hanging on his every word as he talked about the Viet Nam war and racism in America.  The rest is community and sports talk show history.  1972-was the debut of my radio talk show “Inside Sports” making me the first American black to host and produce my own radio sports talk show in Washington, DC.  Seven years later I met Ali’s close friend R & B legend Lloyd Price and Rahman Ali in Cleveland, Ohio.  Rahman was Ali’s only sibling. We were all there for a charity boxing exhibition for Children’s Hospital featuring The Greatest.  Entered Don King:  Ali made him the first black promoter in the history of boxing.  Don said to me, “Stay close baby we are going places.” Famous last words.

“Deal or no deal-No Deal” I am returning a $10,000 check to Don King because he didn’t keep his word. I remembered the advice his “Right Hand” and his close confidante Connie Harper gave me when he first arrived in New York City from Cleveland. She said, “Don’t take any money from DK unless you have earned it.” Best advice ever!  When I earned it he tried to pimp me with one of his welfare checks for $10, 000.

In 1973 Muhammad Ali made me “The Chosen One.” He invited me to sit on the Mountain Top next to him while he held a press conference with the media.  In Chicago, in the summer of 1974, the champ invited me to fly to Zaire, Africa for a one on one interview.  I said, ‘No’ to the invitation.  I was scared to fly across the ocean.  Ali stunned the world when he knocked out the undisputed and undefeated heavyweight champion George Foreman in the 8th round on November 30, 1974.  Five days later he returned to the U. S. from Zaire.  On his arrival in New York City, he called me for the first interview as he had promised.  When he called me, I was just a nobody trying to be somebody!

The Rumble in the Jungle is considered the greatest comeback in sports history.  A Muhammad Ali HBO special titled “Whats My Name” is being produced by NBA super star LeBron James makes its debut this month.  You will get an opportunity to compare what is real and what is “Fake News” produced by a young man who has no clue and probably does not know his own name. https://www.youtube.com/watch?v=lk0Tfng1g1w / see link “Harold Bell and Muhammad Ali Uncovered & Uncrowned!” Compare the two documentaries for authenticity and original footage.

Our history is constantly being stolen and written by people who have never walked in our shoes. “When We Were Kings” for example; won an Academy Award for best documentary in 1996, it was also a financial success filmed in Zaire, Africa. The documentary was based on the blood,sweat and tears of the combatants, Muhammad Ali and George Foreman.  They made it all possible. Neither received a dime from the proceeds of the film. The producer Leo Gast who does not look like us went to the bank and we went back to the ghetto–GREED among the brothers was the determining factor. “Until the Lions hire their own producers, editors and PR firms the glory of the hunt will always go to the hunters.   We don’t need Ken Burns, Johnathan Eig and Randy Roberts telling us how flawed, Malcomb, King, Jackie and Ali were–they were human!  Our children need to know that their ancestors were not hoodlums and thugs as portrayed in these books and documentaries.  They need to know their ancestors were Kings and Queens.

In 1975 the DC Chamber of Commerce honored Muhammad Ali as the Athlete of the Century.  During the dinner presentation made by DC Mayor Walter Washington, Ali introduced me as his friend and asked the Mayor, “Do you know Harold Bell and the Mayor responded, “Yea I know Harold who does not know Harold Bell?” Ali said “You are not as dumb as you look.”  The Mayor laughed and the standing room only crowd laughed and screamed.  Only Ali could get away with something like that!  The next morning he recorded a promo for my Inside Sports talk show, another radio first never done before or after his stella boxing career. 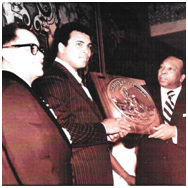 In June of 1975 Mayor Walter Washington presents plaque to Muhammad Ali honoring him as the DC Chamber of Commerce “Athlete of the Century.”

Washington Redskin QB Joe Theisman and I are Washingtonians of the Year. His teammate kicker Mark Mosley and our wives look on.

2OO5 would be my last up close and personal contact with “The Greatest.” He was in DC to watch his baby girl Lalai Ali retain her title on the undercard of Mike Tyson.  This would be “Iron” Mike’s last hurrah of his great boxing career.  He quit while sitting on his stool refusing to answer the bell for the 7th round losing to Kevin McBride, an unknown heavyweight.  I was able to spend a few moments with Ali as he made his way to his limo with hundreds of fans following closely behind.  His brother Rahman cleared a path for our last embrace.  Parkinson disease made his movements difficult and his speech was slurred but the smile on his face when he saw me was priceless.  RIP my friend.

Footnote: On June 4th 2019 the SE Dream Center–Miracle Theatre–Kids In Trouble–Black Men in America.com will host “We Remember Muhammad Ali.”  Comedians and surpreme impressionist Sylvia Traymore (first black female to write for Saturday Night Live) and Chris Thomas (BET Mayor) will M. C. the show.  Sylvia and Chris are both deciples of Kids In Trouble and Inside Sports.

Footnote: Friends and family from as far away as Louisvile, New Orleans, New York City, New Jersey and Philadelphia will participate in the tribute.  Special guest Glen Singleton hails from New Orleans is Muhammad Ali’s “Best Fan” given the title by the “Greatest” himself. See link https://www.youtube.com/watch?v=c_uxe5gvEaM. The champ’s first cousin Keith Winstead is a historian from Louisville and actor/producer Cedric Turner is Ali’s first cousin from New York City. Roy Foreman is the brother of former heavyweight champion George Foreman  who was in the corner of his brother on that historical night will discuss the state of mind of his brother before and after the fight. Live entertainment will be provided by the band Courtland Experience and vocals by Royal Height and Dick Smith. For the past 20 years Dick has been the host of a jazz session held at the Westminister Church from 6 pm until 9 pm in SW DC.  The Muhammad Ali Tribute will be held at the Miracle Theatre located at 535 8th Street SE Washington, DC. The theatre is located one block from the Eastern Market subway.  RSVP tickets will be required to attend.  There will be limited seating and no tickets will available on day of tribute.  For ticket locations and more information call 240-334-7174.