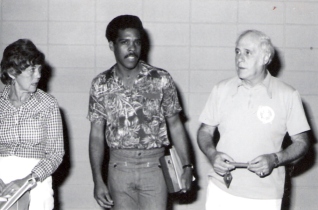 The 2016 NBA All-Star Game and an email from Round Ball Report TV host Andrew Dyer in 2011 brought back this reminder for a little known black history fact, before their 15 minutes of fame, guess who came through Kids In Trouble, Inside Sports aka Harold Bell? 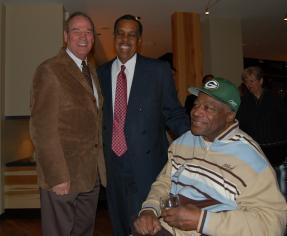 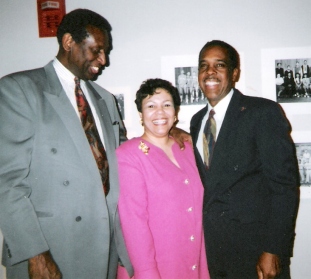 In closing, all the glory goes to God, but I thought I would remind you anyway.  Have a great and God blessed day.

My high school coach and savior Dave Brown heard me on my Inside Sports radio talk show apologizing for tooting my own horn.  His advice after the fact, I never forgot, he said, “Son you don’t ever have to apologize for tooting your own horn, because first, you have to have a horn to toot.”  Coach Brown was a wise man.

My hero, Coach Dave Brown and his wife and daughter as I pay tribute and thank him for saving my life.

The 2011 e mail that inspired this blog

It is hard to believe that 35 years after I made my bold move to sit in the middle of the white media at the Capitol Center (Washington Bullets), that legit and qualified blacks in sports media are still being denied their seats at sports media press tables!

Media and pro sports are still the last plantations because the brothers and sisters who have benefited from others who have blazed the trails are now the roadblocks.  They are still not reaching back and pulling others along with them.  It is amazing how “Two dollars and your name in lights” can make one forget!

I just received an e-mail from another black female sports reporter in Kansas.  She ask me to contact the promoters at the Muhammad Ali Celebrity Fight Night in Phoenix, Az to request credentials for her.  She received the same type of response from the PR people you received.  She has been legit for over 30 years.

We in many ways have to blame ourselves for most of these racist acts by the present folks in charge.  The likes of Don King, Rock Newman, etc treated blacks in sports media with little or no respect.  They hired PR people from another planet!

We keep talking about progress and the opportunities for blacks in America—did you check out that BS on ESPN this week about blacks in sports?

I was more than proud to see Michael Wilbon take a stand and call folks and organizations out for their lack of compassion for others.

The program did point out the number of major newspapers (in the 90s) with black sports editors on staff are in single digits. The same can be said of the number of black PR Directors in the NBA, NFL, MLB, Tennis, Golf tournaments and hockey is out of the question.  Put all the sports TOGETHER and you can count the black PR people on one hand.  Rev. King must be turning over in his grave.

This e-mail takes me back to my first NBA All-Star Game in Houston, Texas.  I encountered the exact same ROADBLOCK, unlike you I had the real NBA GODFATHER in my corner—Red Auerbach.

I will drop a note to my NBA contact (he was the one who denied me) and ask him to double check for press credentials for your two reporters.

I can’t promise anything but what the hell!

Remember, the problem usually starts at the top and he is at the top. The worst thing he can say is “No.”

And by the way, that GODFATHER tag you guys have given me is very flattering but the truth be told I am just another brother in this on-going struggle to be free. God bless and keep me and Hattie in prayer.

Harold. It’s time for you to pull their coat as the Godfather with your personal contact if he’s still in place because they gave us the standard thanks but no thanks response.

Sent on the Sprint® Now Network from my BlackBerry®

Thank you for your interest in covering NBA All-Star 2011.

Unfortunately, space limitations preclude us from issuing credentials for this year’s All-Star events for Roundball Report.

I’m sorry we are not able to honor your request.  However, should anything open up, we’ve kept your request on file and will notify you.