October 30, 2019, marked the 45th anniversary of The Rumble in the Jungle.  On this date in boxing history, Muhammad Ali stunned the boxing world with an 8th round knockout of the undisputed and undefeated Heavyweight Champion of the world–George Foreman in Zaire, Africa.

On November 3, 1974, Muhammad Ali returned to New York City to make more sports history when he called me, I was a little known sports talk show host in Washington, DC, but still Ali invited me to come to New York City for an exclusive one on one interview.  This invitation made me the first Afro-American/Negro/black/colored/N to ever be invited to interview an undisputed reigning Heavyweight Champion of the World one on one. Why me?  Ali had not forgotten a promise he made to me in Chicago before leaving for Africa and what is now known as “The Rumble in the Jungle!”

When I hit the airwaves with The Original Inside Sports in 1972, the format changed the way we talk sports in America and now around the world. I was the first talk show host to successfully blend sports and politics into a radio talk show format.

I am the reason sports talk show host Jim Rhome is worth 75 million dollars, NFL/CBS host James Brown is worth 10 million dollars. In the meantime, the likes of ESPN’s Stephen A. Smith will be trying to negotiate a 10 million dollar contract for the year 2020 and ESPN’s Mike Wilbon formerly of the Washington Post is now earning 6 million dollars. The common denominator, they all copied my Original Inside Sports talk format–unheard of before1972.

When I hit the airwaves with The Original Inside Sports in 1972, my format changed the way we talk sports in America and now around the world.

Dr. Harry Edwards was the architect behind the 1968 Olympic Boycott that featured winning sprinters John Carlos and Tommie Smith standing on the platform holding their right hands high with black gloves protesting discrimination in America.  The protest was heard around the world.

Dr. Edwards said, “Harold, congratulations, your archives are valuable and should be given the broadest possible exposure.  Your discs and videos of your programs belong in the new Smithsonian Institution of the National Museum of African American History and Culture (NMAAHC).  A wing of the new museum will be dedicated to the struggle in sports and will be titled “Leveling the Playing Field”.  Your work was a major force over the years in leveling the playing field, especially in terms of the struggle to define and project “Our Truth!”

Mike Wilbon and the legendary late Gary Mays aka “The One Arm Bandit” during a  celebration of Black History Month in DC.

Sam Jones, James Brown and the late Earl Lloyd as we celebrate Black History Month on Bolling Air Force Base.

“Inside the NFL” I wonder who thought of that tag?

I made more sports media history when NBC affiliate WRC-TV 4 in Washington, DC aired a segment of my one on one interview with Ali in primetime on Sunday, November 23, 1975.

The talk format was so popular and had so much potential the Washington Post kidnapped my tag INSIDE SPORTS in 1978. They would send almost their entire sports and Style section department writers to New York City to publish “Inside Sports Magazine.”

The Magazine folded in two-years after losing several million dollars. The problem, the paper’s owners Katerine and son Donald Graham and their All-Star publishing team could not figure out how to transform print into my popular Inside Sports talk show format.

He was honored here in my hometown of Washington, DC as “Sportscaster of the Year” after he had copied my sports talk format that I had introduced decades before he discovered he was a benefactor of “White Privilege.” 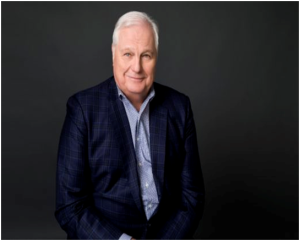 When Mr. Hansen discovered who I was and my sports media history this was the telephone message he left for me. “Harold this is Dale Hansen in Dallas (summarizing) everything you have done makes my little bit look like a page off the covering of WHITE PRIVILEGE!”  https://www.youtube.com/watch?v=mTWMUhYG0Y8
I have labored in AM radio (the weakess signal in radio broadcast media) almost my entire career.  My contributions to sports talk and community reach-back are unsurpassed. Pro athletes, politicians, judges, police chiefs, media personalities have all followed my lead into the inner-city to enhance the growth of inner-city children. The NFL, NBA, MLB, and NHL all care because Harold Bell went where there was no path and left a trail in the community for them to follow.

I use my talk show format to campaign successfully to have two pro athletes inducted into their hall of fames after they had been forgotten and blackballed, Willie Wood (NFL) and Earl Lloyd (NBA).  The athletes I have gotten an early release from jail are too many to count.

Icons, Don King (Boxing) and Jim Brown (NFL) had to turn to Harold Bell and Inside Sports in times of trouble. When the media was calling King a murder and thief, I could be seen on National television (Geraldo Live) defending him against a panel of experts that included boxing historian the late Bert Sugar and the late Nobel Peace Prize winner, Jack Newfield. They all thought he should be locked up and the key thrown away. I argued that Don should be given a second chance and a opportunity to turn his life around which was and is suppose to be the American way.  https://www.youtube.com/watch?v=nygALb50FV4

Jim Brown who was the NFL poster boy for domestic violence during his NFL career was arrested again in 2007 for the same offense against his wife Monique. Jim asked Monique to call me for help. I started a media campaign to get him an early release from prison.

In 2007 Jim repaid me by conspiring to rip off NFL Hall of Fame player Willie Wood for $57,000. The money was raised to help pay Willie’s nursing home bills during a tribute coordinated and hosted by me and Willie’s former University of Southern California teammate, attorney Bob Schmitz.

Unknown to me Mr. Schmitz had assigned members of his family to collect all monies raised on behalf of Willie during the tribute. The tribute was attended by Willie’s former teammates, Bart Starr, Paul Hornung, Willie Davis, Boyle Dowler, and hall of fame players, the late John Mackey, Charlie Taylor, Sam Huff, and Jim Brown among others. 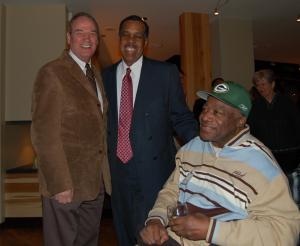 Jim Brown and the late icon comedian Dick Gregory and I huddle during the tribute.

When the tribute was over Willie was asking, “Where is my money?” All roads led back to his Attorney Bob Schmitz.  He suddenly disappeared without a trace.  I called my partner and friend Jim Brown and gave him an update.  He agreed to call Schmitz to make an inquiry.  I suggested that Willie’s sister Gladys be a part of that conference call.  Two days passed and I had not heard from Jim or Gladys for what had transpired during the call to Schmitz?   I dialed Gladys’ number and I was in for a shock, she told me that Jim had demanded she hang up the phone and he would handle everything.  To say I was livid would be an understatement. I had to take a deep breath before I dialed his number.

He picked up the phone and I asked the question, “What was the status of the call to Bob Schmitz?”

He immediately jumped on the defense and asked the question, ‘What the F–K was I doing questioning him about some MF money and Bob Schmitz?’  I thought I had entered the twilight zone and had landed on some street corner in SE DC among some thugs and hood rats!  I said my two-cents and hung up the phone.  I realized how lucky I was to be on the other end of the telephone. I remembered he was caught cheating on the golf course by a friend.  Jim beat him bloody and had to settle out of court.  If Jim Brown could have come through the telephone I would have been in for a good ass whipping, but not without a fight!

This whole charade was my fault because I could not see the forest for the trees. I had been forewarned by his good friend Congresswoman Maxine Waters, Olympic sprinter and Gold Medal winner Jackie Joyner Kersey, and former NFL coach and President of the Cleveland Browns, Mike Holmgren. They all swore Jim Brown was nothing but a two-bit hustler of black athletes.  He has hustled the best, Muhammad Ali, George Foreman and recently Don King.  He saved his biggest hustle for last, President Donald Trump gave him a grant for 50 million dollars disguised as “Prison Reform.”

I should have closed the door on him when Lenny Moore a former Baltimore Colts’ RB/Flanker and NFL Hall of fame player called me regarding our friend.  He said, “Harold could you talk to Jim Brown for me?” I said, ‘What’s up?’ He said, ‘Jim has been spreading the word that I have been Bad Mouthing him to the Baltimore Colt players!’  Lenny Moore is a class act and one of the nicest human beings you would ever want to meet—this was not his Mode of Operation.  Jim was paranoid because the Browns had uprooted in Cleveland and had moved to Baltimore–in Cleveland he was king.  In Baltimore, Lenny was idolized and Jim felt threaten. To make a long story short I had to meet with Jim and explain to him that whatever he was hearing about Lenny was not true–case closed! Lenny could not thank me enough.

In closing, I am grateful for this day in sports history that Muhammad Ali opened the door for me to make this great journey by his side without compromise.  RIP my friend.

Footnote: If I get a chance to dance with the Angels and the question is asked of me, “Harold what did you do in 2019 to make sure our Democracy was kept intact–did you stand on the sidelines and do and say nothing?”  Hopefully, I will be able to say, ‘I took a stand and I remembered my brother and friend in the struggle, Congressman Elijah Cummings and how he shown compassion for Michael Cohen a former attorney for President Trump. The President called him a “RAT!”  Congressman Cummings explained the definition of being called a rat (snitch) in the inner-city and said, ‘We are better than that!’