L-R Hattie and I during the screening of “We Remember Muhammad Ali” on the big screen at the Miracle Theatre on Capitol Hill June 4th.  The debut made us the first husband and wife team to produce Muhammad Ali on the big screen.  Next photo celebrating her 80th Birthday July 6th.

I remember decades ago my Spingarn High School Coach Dave Brown explained to me the difference between chickens, turkeys, and Eagles.  Unbeknownst to me, I had just encountered a group of chickens and turkeys during a high school hall of fame induction banquet.   The DC Coaches Association was honoring DC High School Coaches in 1976.  The banquet was being held at the Fountain Blue Banquet Hall in Prince Georges County,  Coach Brown was an inductee.

The chickens, turkeys and the Usual Suspects were all high school coaches, teachers and administrators in the DC Public School system (they all know who they are).  Decades later, little has changed.

This group of men and women were entrusted with leading and showing our children how to be responsible and caring adults—not to be envious and jealous player-haters like most of them.  Leading the group were the Usual Suspects, Spingarn High School coaches the late Frank Parks, John Wood, and my friend Cardozo/HD Woodson coach Bob Headen.

Coach Brown who was a little under the weather had asked me if I would accept the induction award in his place—no problem.   My wife Hattie a former teacher in the system was by my side during the awards ceremony.   When it came time to accept the award on behalf of Coach Brown I was told by Mr. Parks I could not accept the award.  He did so without explanation, but while walking away he said, “Your wife can accept”.  I just looked at him and smiled!  Hattie accepted the award.

On my next visit to see Coach Brown at his home in NE DC to give him his award, I told him about the action and position taken by the DC Coaches Association.  He chuckled and reminded me that I would be encountering numerous chickens and turkeys in my life time.   He said, “Son your best bet is to fly like an Eagle above the clouds and avoid them”.

Still, I was so what surprised by the chickens and turkeys that I would encounter in the Game Called Life.  During my playing days as an all-around athlete at Spingarn High School, I thought I was the straw that stirred the drink.  Whenever I was on the field of play (Football, basketball, and baseball) I thought I was the best until the guy in front of me proved me wrong.  I never saw a football I could not catch, a basketball I could not shoot or a base I could not steal.  I play the Game of Life the same way–to win and not at all cost!

When the game was in doubt I wanted the ball and this kept me in hot water with my teammates and coaches.  Head Coach Dave Brown was the exception he looked the other and kept calling my number.  He did put his foot down in a game against our rival Phelps Vocational High School to let me know he was still in charge.  Phelps was our next door neighbor on “Education Hill”, located at 24th &  Benning Road in NE DC.

We were playing Phelps at Eastern High School on a Friday evening.   The game was important for us to win and maintane our hold on first place in the division.  The score was tied 0-0 headed into half-time with 30 seconds left on the clock.  The ball was in our possession in the Red Zone and Coach Brown called my number.  QB Donald Wills hit me with a perfectly timed down and out pass for the score, but I was off-side.  I jumped before the ball was snapped and the play was nullified.   As we were headed toward the bus for a half-time chat I verbally beat up my QB blaming him for not calling the signals loud enoug for me to hear.  I had no clue Coach Brown had heard my verbal beat down of my teammate.

On the bus, he went over some of the mistakes we made in the first half and then asked me what happen on the touchdown that was called back?  My feeble defense, “Wills was not calling the signals loud enough for me to hear”!  Coach’s response was short and quick, he said, “Son your position on the field as a wide receiver allows you to look down the line and watch for the snap of the ball”.  It was so quiet it seems like everyone was holding their breath waiting to exhale.   Coach broke the silence with, “Bell you keep your seat here on the bus son, and we will try to win this one without you”!  I could not believe my ears, he said, “Win without me”.  I could not wait to see this happen.

The scene on the bus reminded me years later when Denzel Washington played a crooked cop in his Academy Award winning performance in “Training Day”.  I wish I could have told Coach what Denzel told the residents in the Hood he patroled after they refused to assist him and held him at gun point until his righteous partner got out the Hood safely.  He said to the residents, “Do you know who the f–k I am, I am the police”.  I look back thinking that is what I felt like saying to Coach Brown when he locked me on the bus, “Do you know who the f–k I am, I am the best wide receiver on the planet”.  My dumb ass would have been walking back to Spingarn.  By the way, they won without me 6-0.  Wills ran a punt back 63 yards to win the game.   I had to suck up my pride and apologize to the coaching staff and my teammates for my selfish and bad behavior.  It was a lesson that was well learned—proving no man is truly and Island. 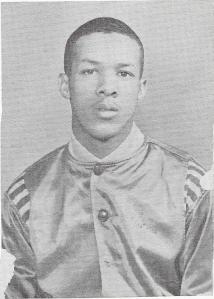 QB Donald Wills and me, Donald was the best all-around athlete on the football, basketball and baseball teams in 1957.  In memory, Melvin ‘Weasel,’ Jackson (Phelps) was a close second.

I think back to that moment at the DC Coaches Association Banquet, Bob Headen, Frank Parks, John Wood, and the Usual Suspects, out of all of them Headen should have known better.  Parks and Woods were two nobodies trying to be somebody.  I remember I was also critical of the coaches’ banquet being held in PG County instead of Washington, DC home of our public schools.

Headen and I had a long and storied sports history.  We both were outstanding all-around athletes and rivals in high school.  That rivary continued at HBCU schools, Winston-Salem State and St. Agustine Universities.  After college, our sports history brought us back to our hometown of DC.  We were teammates on the most successful and celebrated minor league football team to ever play in the Nation’s Capitol–the Virginia Sailors ( affiliate of the Washington Redskins).

John Cash, Bob Headen and me celebrating a Sailors’ championship win in Mobile, Ala.

During that Virginia Sailors era, Headen became the head football coach of Cardozo High School and I became a Roving Leader for the Department of Recreation & Parks (Youth Gang Task Force).  Headen recruited several teammates on the Sailor team as assistants for his high school team and I was one of them.

In the meantime, I was recruiting my wife Hattie a teacher and swimming coach at the school to say “I do” and to be my lawful bride.  We were married in November 1968 shortly after the riots nearly destroyed DC.

As Wide Receiver coach for the 1970 West All-Star Team.  Here I am showing and telling DC Public High School All-Stars, Wilson’s Wagner and Cardozo’s Stovall to catch ball in your hands and not their chest.

Alethia McCauley a teacher at Cardozo and Bob were married shortly after us.  I was named the Godfather of their first born, Robert Headen, Jr.  After the Sailors, Bob and I would become teammates on a touch football team calling themselves Bergman’s Laundry (sponsors).  The team would become one of the most feared in the Montgomery County Touch Football League.

In 1972 Bob would leave Cardozo and continue his legendary football coaching career at the brand new HD Woodson High School in NE DC.  In 1974 I became the first black to produce and host his own radio sports talk radio show in Washington, DC.  “Inside Sports” aired on W-O-O-K Radio.  The Inside Sports format changed the way we talk and report sports in America.  Bob would develop a powerhouse football team at HD Woodson.  His players were bigger than the NFL Washington Redskins and some thought they were better.  In some circles, they were known as “The Monsters of the Inter-High” as they ran through and over the competition.

There was one game that got my attention and I found it rather disturbing; HD Woodson was at least 60 players strong against a Phelps team who had less than 20 players in uniform.  When the final whistle was blown Bob still had his starters on the field.  The final score was HD Woodson 90 and Phelps 7.   I found this unacceptable coming from my friend and teammate.  What ever happen to sportsmanship and fair play taught by our coaches, Sal Hall, and Dave Brown?

The next day I called him out on my radio sports talk show “Inside Sports” for setting a bad example as a teacher and coach of young men.  This was definitely over kill!  He called me and ask for equal time to explain his position and reason for having his starters still in the game until the final whistle.  I granted him equal time and his rationale to this day still makes no sense.  He said, “I wanted my team to become the first DC Public High School to score 100 points against an opponent”!  I would guess the snub at the coaches banquet was his and the Usual Suspects’ revenge!

There are a few wannabees who are still hiding in the closet and think they are flying under my radar like Richard Evans and Clement Troutman (frauds).

There are so many chickens and turkeys flying in limited air space in the DMV they need a flight plan and an air traffic controller to keep them from colliding in midair.

I thank coach Brown for forewarning me, I learned to fly like an Eagle.

WOW—Thank you Zang Auerbach for making our birthdays one to remember.  Zang was a former cartoonist for the Washington Star Newspaper and the brother of our friend NBA legend Red Auerbach.

You can read the complete stories of these chickens and turkeys in my new book titled “Harold Bell’s Walk through American Sports History With Champs & Chumps”.   The second edition is  ‘The Commemorative 45th Anniversary of The Rumble in the Jungle’ @ http://www.blackmeninamerica.com/ click on Books and Book Reviews.