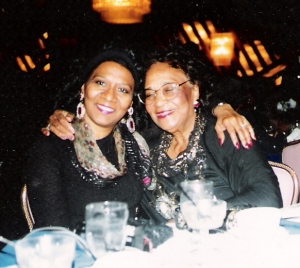 Hattie T was the first born in Orangeburg, S. C. to Civil Rights icons the late Dr. Charles H. Thomas, Jr. and Elease Thomas.  Her mother was a school teacher and her father taught psychology at South Carolina State University.  He was also the President of the local chapter of the NAACP and he marched with Dr. Martin Luther King in the early 50s.

This is a faded Christmas card received from Dr. King to the Thomas family during the holidays.  Dr. King is seen sitting on the left and Dr. Thomas is seen standing on the right in the home of the Thomas Family.

Dr. Thomas is a graduate of Dunbar High School in Washington, DC 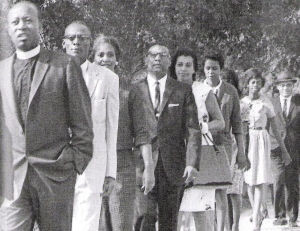 In the meantime, his oldest daughter Hattie and her siblings followed him and his wife Elease to the picket lines to protest racial discrimination in the city of Orangeburg.

Hattie is a graduate of Allen University in Orangeburg and received her Masters Degree at Indiana University.  She landed her first teaching job in Greensboro, NC at the HBCU Bennett College.

In 1967 she moved to Washington, DC which she considered her second home and accepted a job in the DC Public Schools at Cardozo High School in the NW Shaw/Cardozo community.  The school was located several blocks from the historical U Street corridor.  Her first teaching assignment—girls swimming coach.   It was here she met Civil and Human Rights and youth advocate Harold Bell her future husband.  He was volunteering as the wide receiver coach for the Cardozo football team.

Top Photo: Hattie with beginners in the Cardozo HS pool and me with Redskins’ RB Larry Brown and the late LB Harold McLinton at the Kids In Trouble Hillcrest Saturday Program.  NFL Films/CBS Sports videotape the first ever national television community promo for the NFL.  Larry and Harold are seen here teaching water safety to inner-city youth.

Hattie became engaged to Harold shortly before the 1968 riots in April and watched him take to the dangerous streets of DC as a Roving Leader and Youth Gang Task Force member for DC Department of Recreation and Parks.  He had  nothing but a DC police badge for protection.  He was on the streets trying to negotiate peace between the armed cops and military personnel with inner-city residents.  Hattie and Harold were married in November 1968 and found Kids In Trouble, Inc. in December.  This was just in time for their first ever KIT toy party for elementary school children. 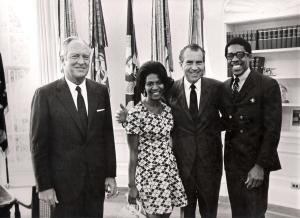 She was there in 1969 when President Richard M. Nixon invited him to the White House to renew an old friendship established in the late 50s when Harold caddied for him at the Burning Tree Golf Course.

Hattie was there in February 1974 when Harold became the first black to host and produce his own radio sports talk show “Inside Sports” in DC.

She was there in 1974 when Congressman Lou Stokes (D-Ohio) read his name into the Congressional Record on the House Floor for his work with youth gangs and at-risk kids on the streets of the inner-city.

She was there when Muhammad Ali woke him up in the middle of the night inviting him to New York City to interview him after he stun the world with his 8th round knockout of George Foreman.  She was there when he became the first black to host and produce his own sports television special in prime time on NBC affiliate WRC TV 4 in November 1975.  His special guest was Muhammad Ali.

She was there when Washingtonian Magazine honored him as Washingtonian of the Year in 1980.  He was the first sportscaster ever honored. 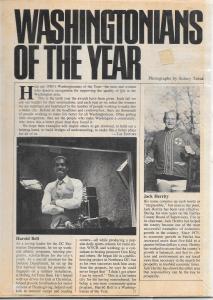 Washingtonians of the Year–QB Joe Theisman and Harold 1980.  Kicker Mark Mosley looks on with wives.

She was there on June 4, 2019 as the Executive Producer against all odds for his on screen “We Remember Muhammad Ali”.

Harold and Hattie with friend Victor Perry outside of the Miracle Theatre on Capitol Hill for the screening of “We Remember Muhammad Ali”.