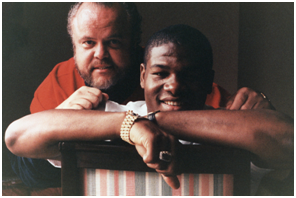 Riddick Bowe former undisputed heavyweight champion of the world is now broke and homeless. Rock Newman lives a lie in black and white on color television. He rides around DC in a white Rolls Royce with a white poodle on the front seat. Negroes and colored people flock to his TV show like he is a spokesman for the black community. We are still looking for love in all the wrong places!

Virginia Governor Ralph Northam recently caused a funk in the DMV (DISTRICT, MARYLAND, and VIRGINIA) and beyond after a 1984 college yearbook photo with him appearing in a KKK robe or in blackface! My question is what do you say and do when a television personality is caught in blackface pretending to be white his entire adult life?

In June 2005 there was a press conference held at the ESPN Zone in Washington, D. C to talk about the upcoming Mike Tyson vs Kevin McBride heavyweight boxing match scheduled in Washington, DC. The undercard would feature the undefeated Laila Ali the daughter of The Greatest, Muhammad Ali.

I was seated down front when the event’s co-promoter Rock Newman walked into the room. The next thing he said, “Joining us today is one of DC’s greatest athletes and sports media personalities, Mr. Harold Bell.” To say I was surprised would be an understatement. I had to check the room to see if there was another Harold Bell seated somewhere! I made my way to the podium after the introduction of the fighters and thanked Rock for his kind words. During that conversation with him and the co-promoter in name only, Marty Wynn, I suggested to Rock and Marty the idea of taking the fighters out into the community with a message “Spread the love and stop the violence.” He then told Marty to give me “All Access” to the fighters. Marty then suggested that “We will get some tickets for Harold’s kids.” As I exited the ESPN Zone I encountered my former Winston-Salem State University roommate and football teammate, D. C. Boxing Commissioner, Dr. Arnold McKnight.

I told him to expect a call from Rock Newman describing how he disarmed and handled me at the press conference. Right on cue, Rock called him the very next morning saying, “Have you ever seen Harold Bell so meek, did I handle him or what?” Dr. McKnight called me immediately and said, “Your boy just called as you had predicted.”

People like Rock Newman are so predictable, once they get two dollars more than someone else, suddenly they become smarter. This is the same Rock Newman who flunked out of Howard University. Dr. Arnold McKnight aka DC Boxing Commissioner was Rock’s former baseball coach at Howard University. Dr. McKnight had to approach the teacher responsible for his flunking out to change his F grade to a C. He wined and dined her and took her to his bed. It makes you wonder how much did Rock pay for his degree?

One evening after baseball practice Dr. McKnight was walking through the locker room and discovered a wallet lying on the floor. He picked it up and looked in it to identify the owner and discovered two driving licenses belonging to Rock Newman. The Prince Georges County license ID was for a white man and the DC license ID was for a black man. Dr. McKnight called and asked me to meet him at Face’s Restaurant on Georgia Avenue and it was there he showed me the two licenses.

Rock is seen in the photo above in a bright colored dashki trying to look and pretend to be as black as possible.

I was associated with Don King for over thirty years and I know you can’t believe everything you hear that comes out of a boxing promoter’s mouth, especially a Don King “Wannabe,” like Newman.
https://www.youtube.com/watch?v=JEC9hX3jQVo/ Don King and the State of the Black Athlete.

In one of Mike Tyson’s title defenses in Las Vegas I was walking through the hotel lobby and I see Don King holding court with several reporters and I headed in the other direction when he yelled across the lobby “Harold Bell just the man I want to see.” I walk over and he says, “You know your homeboy is out here passing for white.” My response, “Who are you talking about?” He laughs and says, ‘Rock Newman.’ That was nothing new to me I always knew he was trying to live in two different worlds, one black and one white. In his home state of Prince Georges County (Charles County) he passed for white and wore his black face when he was in DC.

Riddick Bowe could have been one of the greatest heavyweight champions of all-time but he was destine for failure. The cheerleaders he surrounded himself with for example; Rock Newman (manager), Mayor for life Marion Barry (The Bitch Set Me Up), Cora Masters Barry (convicted felon and theft), Dick Gregory (diet guru), Cathy Hughes (scam artist), Pastor Willie Wilson (pimp in the pulpit),and Kelley Swanson was the head of the class. The only decent human beings in his camp were the legendary trainer Eddie Futch and Dr. McKnight.

Shameless Kelly Swanson (the head of the class) and Rock Newman in black and white.

Bowe has told friends and foe Rock Newman is responsible for the millions of dollars missing out of his bank account! When Newman appointed Cora Masters Barry to head up Bowe’s non-profit organization it was like putting the fox in charge of the Hen House. It was here the monies donated by Bowe were split between Rock and Cora. The monies never made it to the non-profit organizations Bowe earmarked it for. Right about now Riddick Bowe is dead broke and there is a good possibility he is somewhere homeless. Have you ever wondered why Riddick Bowe the former undisputed heavyweight champion of the world has never appeared on the Rock Newman Show?

In 2005 at the MCI Center in Washington, DC Mike Tyson fought his last professional fight by going out backwards–he lost. Kevin McBride was a loser in ever sense of the world but on that June night Tyson refused to answer the bell for the 7th round ending a stella and remarkable boxing career. On that same night would be my last time I spoke with my dear friend Muhammad Ali. He was in town to watch his daughter Laila Ali fight on the undercard which really turned out to be the main event.

The co-promoter for the fight was a young brother by the name of Marty Wynn who had no clue and had to call in Rock Newman who had just sabortaged the career of Riddick Bowe. I tried to warn Marty to watch his back and his bottom-line, but all he could see was bright lights, big city and and opportunity to make a name for himself in the world of boxing. When the dust had settle he and Rock Newman were calling each other names that came straight out of the gutter. It was all about the money and I have each and every email correspondence between the two of them to prove it. The emails were provided by Marty Wynn–too little too late.

See email below from Rock Newman to Marty Wynn where he admonished Marty for not being a “Real Black Man” and goes on to call him The Queen of Bitches and a faggot. Talking about the pot calling the kettle black!

Who are you going to believe me or your lying eyes (this is 1 of 12 emails).

Cora Masters Barry was a former DC Boxing Commissioner. She was convicted of stealing thousands of dollars from the commission. She is standing next to boxing promoter Don King with several other “Usual Suspects” including me.

I remember following up on my conversation with Rock at the ESPN Zone. I wrote, “Rock I have watched promoters and fighters come and go in this town and go through the motions of giving something back. Once the fighting and ego- tripping are over the town and our children remained in the same sad state as when you first arrived.”

The Saturday June 11th fight at MCI Center was billed as “The Capitol Explosion” the explosion. We all should be worrying about the explosion of senseless drive by shootings and unsolved black on black murders in our streets. The murders have reached epidemic proportions. The claim and cry by politicians, athletes and ministers of making “Children First” has become a running joke in my city.

For example, a group of young men who were trying to do “The right thing” by going to school and excelling academically are being pushed aside and to the “Back of the bus.” They are singing sensations, all brothers known as Nu Era . Their ages range from thirteen, fourteen, fifteen and sixteen. They all attend Dunbar High School in D. C. I met the young men and their father Mr. Osaris Marsh in February of 2005. They performed at a Black History event honoring my wife Hattie and me.

I was impressed with their outstanding attributes and their sense of “Family first.” When the Mike Tyson fight was announced I went to my former college teammate and roommate, Dr. McKnight. I suggested that the young men DC natives Nu Era sing the National Anthem for the fight. Shortly after listening to their CD and watching them on DVD Dr. McKnight agreed this was “The Right Thing” to do. He immediately called Promoter Marty Wynn. In that telephone conversation with Mr. Marsh and me listening via speakerphone Dr. McKnight made it clear in no uncertain terms he wanted Nu Era to perform the National Anthem. Marty Wynn’s response, “Doc, Rock and I owe you that much for helping us put this fight together, done deal.”

Enter two weeks later, singing and recording artist Gerald Lavert, suddenly he becomes the frontrunner to sing the National Anthem, what ever happen to Nu Era and making “Children First?” On the eve of the fight I met the late Gerald Lavert traveling with some DC homeboys and I stopped him and introduced myself. I explained the problem and he agreed that was not the right thing to do. He said, “I Got it!” He refused to sing the National Anthem. Gerald was a young man with integrity and he will be dearly missed.

My question to Rock Newman, “How can you call yourself a role model and sell out our children?” Dr. McKnight confessed to me that Rock had sabortaged the young men’s appearance. Newman’s kind of “Plantation Mentality” is a cancer in this city. Our children’s second class citizenship must end. Rock Newman is definitely not the sign of progress or a sign that we have any chance to “OVERCOME!” Movie producer Spike Lee has been nominated again for his latest movie “Black Klans Man” hopefully he will win his first Oscar for “Best Director.”

His sequel could be how a black man appears in black face pretending to be white and give Rock Newman the undercover role. Spike won’t need to hire another actor because Rock could play both roles! Dam, I had forgotten black comedian Godfrey Cambridge played in a similar role in 1970. The plot, a white insurance sales man, Jeff Gerber gets the surprise of his life when he wakes up and discovers that his skin now resembles a black man’s. Let the fun began. Being black in America has not been funny!

Armstrong Williams is another who speaks with fork tongue when it comes to our children.