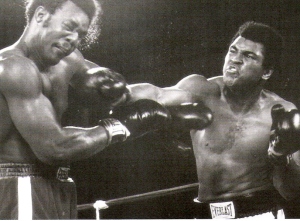 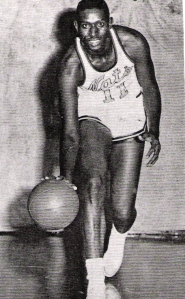 Black slaves were the first professional athlete, their professional origin took place during slavery when they carried their owner’s plantation’s colors into the boxing ring, on horseback and foot races in the hundred yard dash and beyond.  There were wages being bet, it was plantation verus plantation.  This was how slave owners spend their leisure time entertaining themselves at the expense of their slaves.  Some slaves won their freedom as a result of these contests and some lost their lives.

The games continue in today’s modern day pro sports where the plantation mentality still exist in the sky suites and on the playing fields and arenas across America.  Today freedom is won through something called “Free Agency!”  And some pro athletes really think they are FREE.

The best example; NFL QB Colin Kapernick is a “Free Agent” but he cannot find a job in the NFL, all because he decided to kneel during the playing of the National anthem to protest the inhuman treatment of people of color.  Has anyone seen my old friends Vince Lombardi (NFL), Al Davis (NFL), Edward Bennett Williams (NFL), Dan Rooney (NFL), Walter Brown (NBA)–I wonder where have they all gone?

Ninety-nine percent of the owners of these teams in 2017 are still all white males with one black face added to the club—Michael Jordan (NBA).

NBA black players are now being ripped off in the name of Black History.  For example; in the NBA there is All-World Lebron James and NBA pioneer Earl Lloyd.  LeBron’s selling out is no different than Michael Jordan.  Michael responded to critics who question him for not supporting a black politician in his home state of North Carolina.  He said, “White folks buy Nikes to!”

Since the passing of my friend (now everybody’s friend) Muhammad Ali, everyone is an expert on the trial and tribulations of the Greatest. LeBron James is the latest designated expert chosen by HBO and someone or something called “The Ali Estate!”

My question, what does Lebron James know about the life and times of Muhammad Ali?  Only what he has read and learned from he say, she say!  He has no up close and first hand experiences to share with Ali fans all over the world.  This is President Trump’s version of “Fake News!”

I am still waiting to hear Lebron James’ explanation and excuse for selling out Muhammad Ali and why does he think he is an expert on Muhammad Ali!

The group that brought the rights to his name and likeness for 50 million dollars and 20% of the monies generated from the advertising in 2006 are now The Ali Estate.  If you look closely, the group resembles the one-percent,  NFL, NBA and MLB owners.

LeBron James is now being called The Greatest basketball player in the world.  He must think that makes equivalent to Muhammad Ali, nothing could be further from the truth.  If he continues on this path as producer of the HBO documentary as it relates to The Greatest, it will prove he is the fraud several in the sports media are calling him.  It has nothing to do with his basketball skills and everything to do with his qualities as a human being.

There are only a few selected friends and boxing personalities who can give First Hand up close experiences as it relates to Muhammad Ali, his brother Rahman Ali, R & B Legend Lloyd Price, boxing promoter Don King, Business Manager Gene Kilroy, NFL legend Jim Brown and yours truly Harold Bell.   Not one of them can provide the sit down one of a kind video (copyrights) interview I had with him after his historical “Rumble in the Jungle” fight with George Foreman in 1974.  Its the only one on one interview he allowed during his entire boxing career with a black eye.

We can eliminate his faithful servant and brother Rahman because of his emotional state brought on by a “Dysfunctional Family.”  Rahman was responsible for my All-Access to his brother at the height of his career.  My friend Lloyd Price, I have no clue as it relates to his participation in this HBO project, if I had to guess I would say ZERO! Don King is persona non grata.  He owes Ali his boxing life and career, his Thank You was to steal from him.  My man Gene Kilroy was Ali’s business manager and friend its anybody’s guess whether he will participate.  He once told me, “Harold you could have been a millionaire if you had played the game, they would have been calling Howard Cosell the next Harold Bell.”

This brings me to my “Friend” NFL legend Jim Brown, I am sure he is in Lebron’s camp.  He was one of Ali’s closest friends and Jim would sell anybody out for a dollar–I was there when he sold out NFL legend Willie Wood out in 2007 via Willie’s lawyer Bob Schmitz for a mere $57,000 (peanuts), Willie was suffering from dementria and is now living his life out in a nursing home on Connecticut Avenue in NW DC. 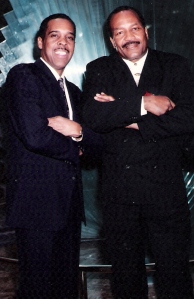 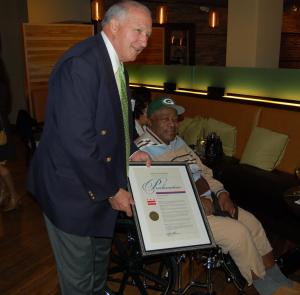 In the NBA pioneer Earl Lloyd’s story “The First to Play” is now being sold by a scam artist by the name of Arka Senguta of Indian descent.  The first players to be sucked-in so far are former San Antonio swingman Michael Finley, active players, Tony Parker, Kiwa Leonard and NY Knicks star Camelo Anthony are the players on record who have fallen prey to the scam so far.  Senguta has a couple of brothers disguised as black men fronting “the documentary” with names like Coodie and Chike.  They are send into the black community making the production look black as he calls the shots from afar. He has a female partner in this rip-off who goes by the name of Jo-Lee. Warning to all NBA players if you see this team of scam artist coming your way with “The First to Play” hide your wallet, here in the DC area they already taken advantage of Earl Lloyd’s friends in his hometown of Alexandria, Va.

Senguta’s first victim in Alexandria was researcher Ms. Cha Bah.  She gathered the stats, and spent untold hours traveling to libraries in and around DC, Maryland and Virginia.   She found the men who were familiar with Earl Lloyd the basketball player and Earl Lloyd the man!  These men were legends in their own right took the time to sit around for several hours talking about the trials & tribulations of a home town boy who made good.  Ms. Bah has been trying to collect her fee of $2000,00 for more than two-years with little or no success.  She has dwindle the bill down to $1,300.00.  Mr. Senguta keeps nickle and diming her like this was some kind of game.

I had mixed emotions about participating in the documentary, but volunteered to participate.  I was not asking for anything or expecting anything, except I wanted to see the documentary a success.

I first met Earl Lloyd when I was attending Spingarn HS in DC it was in the 50s after he had already signed an NBA contract making him the first black player to play in a game in league history.  His older brother lived in NW DC and Earl would often visit him. He played in pick-up basketball on the Parkview and Bannecker playgrounds near his brother’s home.  In those pick-up games you could the DC elite, NBA great Elgin Baylor and Harlem Globetrotter Tarzan Cooper.  There were playground legends, like Daddy Grace, Willie Jones and NFL great Willie Wood also showcasing their skills.

Earl was drafted out of West Virginia State by NBA icon Red Auerbach who was then coaching the Washington Caps.  He played in only 7 games for Red when the team folded in January 1951.

Earl was picked up off waivers after serving in the U S Army by the Syracuse Nationals, where he played 6 seasons. In 1955 he and teammate Jim Tucker became the first blacks to play on an NBA Championship team.  Syracuse beat the Ft. Wayne Pistons 4 games to 3 for the NBA title. Earl’s best year as a pro was 1955 when he average 10 points and 7 rebounds a game.  These stats hardly qualified him for the NBA Hall of Fame.  He was more of a “Enforcer and Hatchet Man” for the Nationals.  In the 1953-54 seasons he led the league in fouls and disqualifications.

He was finally inducted in the NBA Hall of Fame as a “Contributor” which meant he was inducted for being the “First” to play in a game and “First” to particpate in and win a NBA Championship along with teammate Jim Tucker.  The induction took place 2003 fifty-five years after retirement from the NBA.  This was after I spearheaded a campaign with the  late NBA legendary coach, Red Auerbach and the late Washington Times sports columnist Dick Heller. During his acceptance speech he never mention Red Auerbach how Red was intrumental in getting him inducted into the NBA Hall of Fame.  Standing beside him was his presenter, Dave “Judas’ Bing. 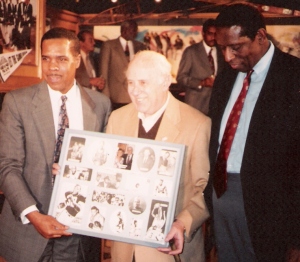 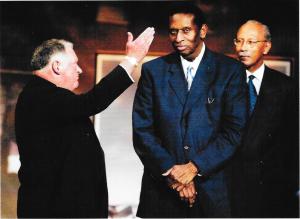 It bothers me when I see a pro athlete like LeBron James selling out his own history out at the expense of one of the greatest athletes and human beings the world has ever known, Muhammad Ali.  This kind of selfishness and prostitution display by Lebron will only tarnish his NBA image.  Ali was always about being INCLUSIVE and not EXCLUSIVE, but when you have Jim Brown in your ear that is par for the course.

Ali’s wife Lonnie has no imput as it relates to this documentary.  She is nothing more than a “Figure Head” that sits on the Board of Directors, she has no vote.

The eye/witness account of her non-participation comes from the CEO & Publisher of Black Men in America.com, Gary Johnson.  Gary shared a plane ride with Lonnie Ali several years ago and she confessed “I have no vote on the Board of Directors!”

The Rev. Gary Johnson (coincident) is the leader of the Southern Christian Leader Conference (SCLC) in Miami, Florida.  In February of 2017 he told me in Washington, DC “Lonnie Ali was in my office recently hustling photographs of her and Muhammad Ali” she wanted a donation for the photo signed by her and said, ‘With my signature this photo would be worth $5,000 on the open market.’  Rev. Johnson said, ‘If she wanted more than $50 we were going to have a problem!’  I am assuming he donated 50 bucks.

The problem with this documentary by HBO and Lebron James is when you read in a press release and it says, “This production has the blessings of the Ali Estate!”  It makes you wonder who is the Ali Estate, evidently it is not his brother Rahman, his wife Lonnie (no vote) or his famous daughter Laila.

Who can you trust with Black American History, certainly not HBO and Lebron James or Arka Sengupta!

Don’t expect any follow-up from Mike Wise, Michael Wilbon, David Aldridge, Bryant Gumble, James Brown, Charles Barkley, or Stephen A. Smith, etc.  The bottom-line, this story will reside under the banner of “Fake News!”  Hopefully, Muhammad Ali and Earl Lloyd both can RIP.  The TRUTH will surface!