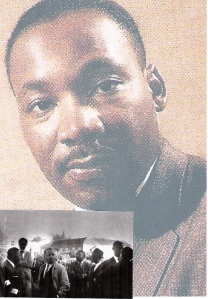 “Has anyone seen my old friends Abraham, Martin, John, Bobby, Megar, Malcolm, or Muhammad—can anyone tell me where they have all gone.  They freed a lot of people, the good die young.”  I just look around and I feel all alone.”

These are the lyrics from “My Old Friend Abraham!” written and performed by song writer Dion Mucci.

On April 4, 1968, I was standing on the corner of 9th & U streets in North West Washington, DC with my co-worker, NFL great Willie Wood.

We had just had a sandwich in Che Maurice a popular in-crowd restaurant in the Nation’s Capitol.  Willie and I were working for the DC Recreation & Parks as Roving Leaders (Youth Gang Task Force).  It was a bright sun shiny day and we decided to just hang out on the corner and enjoy the beautiful weather.

I remember folks were just driving by and honking their horns and yelling at Willie who was a legendary athlete in the city and a member of the World Champion Green Bay Packers football team.

I know some of you are asking the question, “What was an NFL player doing working for DC Recreation & Parks?”

In 1968 NFL players were not making the asinine money NFL players are making today.  Willie needed a second job to supplement his income as an NFL player.  During the off-season he returned home to work as a Roving Leader or teach school.

Suddenly, someone drove by and yelled “Harold they just shot Dr. King in Memphis.”   On April 4, 2017 I am left wondering where has he gone?  We stood on that U street corner never knowing  that it would be a day we would never forget!