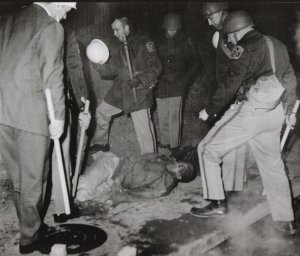 Photos: In 1968 South Carolina State Troopers stand over dead South Carolina State student screaming “Die Nigger die”!  The police brutality on the campus is now known as “Orangeburg Massacre.   The ralling cry is being repeated in American inner-cities 50 years later history repeats itself as unarmed black men are being shot down in our streets at an alarming rate—the bullet has replaced the rope!

I would like to know how is it a story written in the Washington Post in November 1993 does not shed more light on the on-going problem, for example these stories were all written in the past two decades;

The enemy within: Police racism in P.G.

It started simply enough, in a police muster room at the beginning of the midnight shift, with an innocent question. A lieutenant was telling his troops to be on the lookout for a gang spotted earlier in the day brandishing a machine gun.

“Excuse me, lieutenant,” Officer Al Gauthier piped up. “What race are the suspects?”

“What race do you think?” the lieutenant snapped.

“Aren’t they always?” the lieutenant retorted.

Officer J. B. Harrison — the only black officer in the room — shifted uneasily in his seat. It wasn’t the first time he had heard a bigoted remark while serving in the Prince George’s County Police Department. But to hear it from a commanding officer in an open muster room in a county where half the population is black was another matter.

Politico Magazine in 2014 published a story citing the Prince George County Police Department as “The Fugerson Next Door” to the Nation’s Capitol. The history speaks for it self, the PG County police department is known as one the most brutal police departments in America when it comes to Afro-Americans.  A young Afro-American man was hung in his jail cell while waiting to be tried in a hit and run death of a PG County Policeman.  Ten years later the culprits are still at large.  A black Prince Georges County police officer recently accused the  department of overt racism.  He had to go undercover with a mask over his face and muffled voice to expose the practice.  In the meantime, the Chief of the department Mark Mcgaw goes on the defense and says the accusations are false.  He says, the officer should come forward so that “The Thin Blue Line & Code of Silence” can be use against him.  Imagine, if black officers with a gun are scare of their co-workers, think about the odds against an unarmed person of color!

DC Police Chief Burtell Jefferson the first Black Chief of Police in the Nation’s Capitol was a staunch suppporter of “Police Community Relations”.  He and Assistant Chief Timon O’Bryant were hands-on and kept peace in the streets in the Cardozo/Shaw community in the late 60s and 70s.

Politico Magazine recently published a story on a white chief of police in Wellsingley, Mass. by the name of Terrence Cunningham. Chief Cunningham did the unthinkable, he apologize for the mayhem that his colleagues around the nation had reaped on people of color for the past several decades. Cunningham is more than just a chief he is the head of the largest police management organization in America. He is the President of the Police Chiefs of America. This is the first time in the history of the police department that a white chief has ever apologize for the acts of police violence in America.  In LaGrange, Georgia the white police chief apologized to the black community for the hanging of a black 18 year old teenager by a white mod.  The teenager was falsely arrested for assualting two white women.  He was kidnapped from his jail cell and hung.  The decades of police brutality all took place in the black community long before Donald Trump became a hotel mogul and President of the United States of America.

In 1968 the Kerner Commission was appointed by President Lyndon Johnson to study why there was so much unrest in the black community. The Commission found; America was headed in the direction of two different societies, one black and one white. President Johnson ignored the report and the NAACP, Urban League, John Lewis a warrior in the early days of the Civil Rights movement and the Congressional Black Caucus all followed his lead. Welcome to the two different American Societies, one black and one white predicted by the Kerner Commision. Don’t blame Donald Trump!

The month of December 2016 also was the witness to the white son of retired Army General Wesley Clark, Sr. who headed the NATO’s Supreme Forces, Wesley Jr. got down on his knees and apologized to native American Indians for the mayhem reaped on them by American Armed forces led by his father.  If you pointed a finger at Governor Larry Hogan and PG County Executive Rushern Baker you would be pointing in the right direction. This kind of bulling and coward behavior is contagious, especially when your next door neighbor is infected. Donald Trump is not the problem–we are!

We allow our city officials like DC Delegate Eleanor Holmes Norton, DC Mayor Muriel Bowser and City Council Woman Mary Cheh to play games with the lives of our children and the residents of the Nation’s Capitol. I cannot believe that Mayor Bowser wants to control who sees the videos of police misconduct. My question, why have the cops wear the video cameras if you are going to control who sees them?  This kind of encouragement supports turning off their cameras or not turning them on at all.

In November 2016 I personally gave Mayor Bowser and Council Woman Mary Cheh information regarding DC interim Police Chief Peter Newsham as it related to an ongoing scam that was occurring at the DCPD warehouse on his watch. All that was required of Mayor Bowser and Councilwoman Cheh was to run a simple audit to uncover the scam. The information also included the firing of a 25 year DCPD veteran Devonnie Gregory without cause. Officer Gregory’s case has been in arbitration for over 5 years.

On Saturday August 20, 2016 Kids In Trouble and Ben’s Chili Bowl hosted a Police and Community Relations forum. Law-enforcement officers from all over the DMV were in attendance. It was at this forum the sins of DC interim Police Chief Peter Newsham came to light. It was revealed that under his command that included Alfred Durham now the Richmond Police Chief help cover-up for an incompetent Commander Keith Williams. Williams’ mismanaged and used poor judgement in mishandling the Evidence Control Branch and the Forensic Services Division as it pertains to the safeguarding of evidence and the storage of it.

For example; evidence showing how Peter Newsham used his police powers to mass arrest over 400 people during a protest at DC’s Pershing Park under the command of former Chief Charles Ramsey. The unconstitutional arrest cost DC millions of dollars after they were sued by the wrongly arrested men and women. The evidence of how Newsham mishandled the protest mysteriously disappeared from the evidence room on the watch of Keith Williams.

The forum also uncovered domestic abuse and sexual harassment by Chief Newsham relating to his former wife and other women in uniform aka Chief Isacc Fulwood. This came as no surprise, law enforcement officers have the highest percentage of domestic violence of any group of professionals in America.

In the meantime, Mayor Bowser and Councilwoman Cheh are still playing hide and seek with Newsham’s problems with domestic violence and alcohol. He was once found lying drunk in the streets wearing his gun, the department confiscated his weapon. Fox News TV 5 in DC recently investigated the sins of Peter Newsham, hopefully that will get the attention of the city’s politicians.  As we head into Black History Month 2017 black folks continue to be their own worst enemy.

This is for the men of color and especially for the kids who die. And black kids will certainly die. The old and the rich will live on awhile, as always. Eating blood and gold, while letting little kids die.

Blacks, Whites, Hispanics, Latinos, Mexicans, Indians (the real Native Americans) and all people of color will die who don’t believe in lies, bribes and contentment and a lousy peace, or the sleazy courts, with sleazy judges and bride taking cops and the blood loving generals who make war and not peace. There are the money loving pimping preachers in the pulpit and politicians, who all will raise their hands against the kids who will die, beating them with laws, clubs, bayonets and bullets, used to frighten the people who don’t go along to get along.

Of course, the wise and the learned who pen editorials in the paper and the ladies and gents with Dr. in front of their names, pretending they live in the richest black county with the highest foreclosure rate in America, all of this while little kids die. They will make surveys and write books and will live on weaving words to smother the kids that die.

Maybe their bodies will be lost in a swamp or prison grave or the Potter’s Field or a jail cell where they are hung by their necks and their deaths are ruled murder, but later changed to suicide? But kids will continue to die.

The day will come and you can be sure yourselves it is coming—maybe not on our watch, but the marching feet of the masses will rise for the kids who died with a living monument of love, joy and laughter. And black hands and white hands are joined together with a song that reaches the sky.

A song of triumphant will be dedicated to the kids who died.