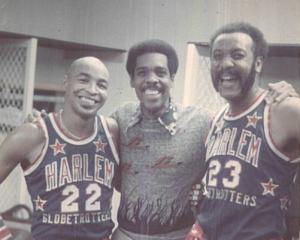 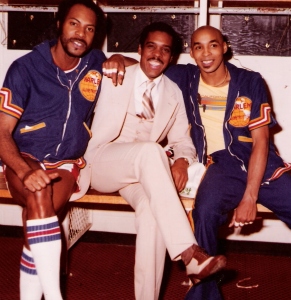 Harlem Globe Trotters Leaping Jackie Jackson, Curly Neal and I smile for the cameras in Landover, Maryland after show at the Capitol Centre.

I remember my favorite Harlem Globetrotter and my favorite country western singer, Curly Neal and Kenny Rogers were performing in almost the same zip code on the same day in April 1988. The Globetrotters were performing in Baltimore that afternoon and Kenny Rogers would perform 35 miles south later that night at the Capitol Centre in Landover, Maryland.  Curly and I had talked several days before his arrival in the area and he wanted to know if I was coming to Baltimore for the game and how many tickets would I need?  I explained to him Kenny Rogers was in town performing that night at the Capitol Centre.  Hattie and I had made plans to attend his concert.  We were big country music fans and Kenny was one of our favorites.  Curly asked if I had I purchased my tickets yet, and I said, “No”.  His response was, ‘Kenny is my man, don’t do anything until you hear from me’!

Curly got back to me the next morning saying, “I got us tickets to the Kenny Rogers show, our game in Baltimore starts at 1:00 pm and the concert in Landover is at 8:00 pm.  I will meet you and Hattie at the box office around 7:30 pm.”

Hattie and I wore cowboy hats and boots to the concert that night.  Curly could not stop laughing when he saw us. He was signing autographs when we arrived.  His bald head made it easy for him to be recognized as Curly Neal of the Harlem Globetrotters.  He was surrounded by some Good Old Boys and their cowgirls.  Curly is second only to Muhammad Ali as the most recognized personality in the world.

The concert was a sellout and I don’t remember seeing anyone else who was black like me.  We had a great time and when the show was over one of Kenny’s reps came to our seats and escorted us backstage to meet the star of the show.  Kenny and Curly hugged like old friends. The two met in Kenny’s hometown of Houston, Texas in the 70s at a Harlem Globetrotter game.  Curly introduce me and Hattie to Kenny.  We shook hands and the next thing out of Kenny’s mouth was, “Curly where is your dam cowboy hat” before Curly could respond the rep had disappeared and came back with a brand new brown cowboy hat in a box.  The smile on Curly’s face was priceless.

Curly wanted to hang out after the show and get something to eat.  Hattie begged off and I took her home.  Curly and I went into DC to Face’s Restaurant an in-crowd hangout on Georgia Avenue NW. They served great chicken and fish.

I dropped Curly off at the Grand Hyatt in DC around midnight.  The next day I would get this frantic telephone call from Curly in Hampton, he wanted to know where was his hat that Kenny had given him at the concert.  I had no clue, and he was not sure whether he had left it in my car and neither was I.  I told him I would get back to him after I checked the car.

The hat was found in the back seat of the car.  I called Curly with the good news, but his response left me dumbfounded.  He wanted me to drive to Hampton and bring him his hat.  I said, “No way Jose”!  I told him I would put the hat in the mail for him at his next stop on tour, but he insisted. I refused to drive the three hours down to Hampton and back to DC to deliver a hat.  We almost fell out about that hat.  My brother-in-law Charles Thomas lll saved the day.  Hattie reminded me he was home on spring break and was headed back to Hampton later that day.

I called Charles and asked him to deliver the hat to Curly–he said no problem.  When he arrived back on campus he called Curly and identified himself as my brother-in-law and he had a package for him.  For some reason only known to Curly, he cussed Charles out and demanded he bring his hat to the coliseum immediately.  Charles was without transportation he asked his friend Rodney to drive him to the coliseum to meet this Curly Neal someone he had once looked up to.  He arrived at the coliseum and was made to wait for 30 minutes.  Finally, a Harlem Globetrotter rep was sent out to retrieved the hat–denying Charles an opportunity to ask him what was his problem?  In a conversation with Curly the next day, he had a lost of memory and asked me to apologize to Charles if it really happen!

Kenny Rogers died on March 20, 2020 in Sandy Springs, Georgia.  He was born and raised in Houston, Texas.  Curly Neal died in Houston, Texas six days later on March 26, 2020.  Curly was born and raised in Greensboro, NC.  He was an All-CIAA Conference player at Johnson C. Smith College in Charlotte, NC.  Curly and Kenny will meet somewhere in the sky, it will be a cowboy with a guitar and a magician with a basketball.

It has been almost 10 years since Washington DC City Paper columnist Dave McKenna wrote, “Black History Mouth–Harold Bell, this sports legend still won’t kiss your ass.” Dave thought if I would be a little more diplomatic and suck up to super-stars who came through me before their 15 minutes of fame, the sky would be the limit. There were local personalities like John Thompson, Sugar Ray Leonard, James Brown, Dave Bing, Adrian Dantley, Cathy Hughes, and Doug Williams to name just a few. There were also super-stars, Jim Brown, and Don King, they had to turn to me for support when they ran afoul of the law, media, etc.  There were many on the outside looking in claiming I didn’t know my price!

Before McKenna, Muhammad Ali’s Business Manager Gene Kilroy said, “Harold if you had been white you would have been a millionaire and they would have been calling Howard Cosell the black Harold Bell”. 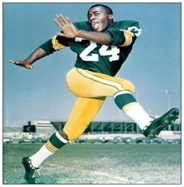 Native Washingtonian the late legendary sports columnis Dick Heller and I congratulate the late great Willie Wood on his induction into the 1989 NFL Hall of Fame.  Dick and I successfuly campaigned for Willie’s induction.  He was the glue and leader of those great Green Bay Packer Super Bowl teams that dominated the NFL in the 60s.  Legendary coach Vince Lombardi called Willie his coach on the field.

Before McKenna, Muhammad Ali’s Business Manager Gene Kilroy said, “Harold if you had been white you would have been a millionaire and they would have been calling Howard Cosell the black Harold Bell”.

J. D. Bethea sports columnist for the Washington Star-News said, “Harold Bell may be the only black guy who grew up in a ghetto, in real poverty, but never learned to “play the game,” that great American pastime.  Everybody plays the game to some degree. That’s what success is all about.  Playing the game.  Being alternately malleable and assertive with the right people at the right time.  Bell never learned. If he had, given his drive and singlemindedness of purpose, Bell would probably be dangerous.”  I always knew, but I refused to play.

God deserves all the credit and my savior Spingarn High School coach, Dave Brown.  I was trying to go to hell in a hurry.  When everyone else gave up on me he didn’t.

Coach Brown passed me on down to Tobacco Road to the legendary coach, Clarence Bighouse Gaines at Winston-Salem State University

He was inducted into the Naismith Basketball Hall of Fame and in 2004 in Chicago I was honored with the first ever Clarence “Bighouse” Gaines Community Service Award.  Two Bulls born May 21st.

NBA legend Red Auerbach and Boxing legend (Big Dogs), Muhammad Ali are two of the Greatest of all-time, they are legends of Inside Sports!

Thanks to, Muhammad Ali, Richard Nixon, Red Auerbach, Angelo Dundee, and Bert Sugar, there was no need for me to learn to play the game.  My game was to help to enhance the lives of inner-city kids.  These real super-stars made this former resident of a one-room shack with an outhouse more than just a local yokel (homeboy).  Running with “The Big Dogs” was a Rite of Passage for me.  They became my friends and allowed me to ride on their shirttails with no strings attached.

Dr. Harry Edwards said in reference to my pioneering Inside Sports talk radio format, “Harold, congratulations, your archives are valuable and should be given the broadest possible exposure.  Your discs and videos of your programs belong in the new Smithsonian Institution of the National Museum of African American History and Culture (NMAAHC).  A wing of the new museum will be dedicated to the struggle in sports and will be titled “Leveling the Playing Field”.  Your work was a major force over the years in leveling the playing field, especially in terms of the struggle to define and project ‘Our Truth!’