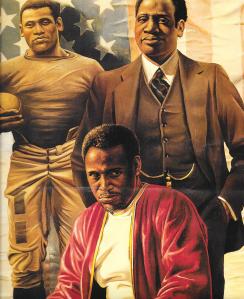 ESPN’s Dan Le Bartard host of Highly Questionable says, “This isn’t about politics it’s about race.” He questions ESPN’S motive, “Let us just stick to sports”, the ultimatum issued by its new president.

Along with that success came “White Privilege” owners Katerine and her son Don Graham of the Washington Post who stole/kidnapped his tag Inside Sports. The Inside Sports Magazine was published in New York City by News Week a subsidiary of the Washington Post IN 1979. They never match the popularity of his radio talk show and folded and disappeared two years later after losing several million dollars.

Harold Bell was the first personality to blend sports/politics into a sports talk show–unheard of in radio and television in the 70s and 80s.

William Taaffe radio and television critic for the Washington Star Newspaper (later Sports Illustrated Magazine) wrote in 1980 eight-years after the Inside Sports talk show made its debut, “Most radio sports talk shows do not contain intimate bits of verse set to music (Wake Up Everybody, One Day We Will All be Free, Respect Yourself, Black and Proud, etc.).

Neither do most shows feature stimulating discussions (media roundtables) about drug use in sports, racism within the NFL, abuse of naive athletes by agents (Adrian Dantley and Dave Falk, etc.) and inspirational messages about life on the streets of Washington, DC. But then Harold Bell is a unique–sports announcer, former athlete, youth advocate and social critic all rolled into one.

Inside Sports rules the roost because of content, freshness and a crusading kind of honesty. As bell says, ‘Most people love to hear the truth so long as it is about someone else’.

The Auerbachs, Dotie, and Red were among the first high profile celebrities to embrace Inside Sports and Kids In Trouble.

Unlike today’s sports radio and television talk show host, he was a community legend long before he became a sports talk show legend. He was truly a brother in the struggle trying to save the lives and enhance the growth of young people regardless of the color of their skin or ethnicity throughout the District, Maryland, and Virginia.

A rainbow of elementary school children enjoyed the annual KIT Christmas Toy party at the Marriott Hotel in Crystal City. He says, “Children are not born racist–racism is taught.”

In 1972 NFL Films/CBS taped the first-ever community promo at the Kids In Trouble Saturday Program in Washington, DC. Redskins’ RB Larry Brown and the late LB Harold McLinton are videotaped teaching water safety. NFL, NBA, MLB, and NHL all followed Kids In Trouble and Inside Sports into the community.

New ESPN President Jimmy Pitaro threw his entire talk show host and writing team under the bus in July when he said, “I understand my on-air talent feeling compelled to speak out. But I also recognize that when I or one of our on-air personalities speak publicly that is received as the opinions of ESPN, and that cannot be. We look at what our fans are telling us.”

With that statement, he gave Skip Bayless, Shannon Sharp, Jason Whitlock, and the other sports talk show host outside the lines of ESPN the upper-hand in sports reporting.  Using a disclaimer was highly questionable!

Presidents who led this great nation depended on sports as an outlet from the everyday grind of the White House. Dwight Eisenhower was an avid golfer, Richard Nixon played college football and golf. He was also a big fan of NFL Redskin Coach George Allen. He visited Redskin Park during his tenure at the White House. Gerald Ford played college football at the University of Michigan, Barack Obama loved to play pick-up basketball and Donald Trump plays golf around the world. When was it that sports and politics didn’t mix?

The weekend of August 3, 2019, will go down as one of the bloodiest weekends in American history. The residents of Dayton, Ohio and El Palso, Texas were blinded-sided by gunmen who committed mass murder in their small towns. The two gunmen have been described as “White Supremacist”!

In 1972 Harold Bell and the Original Inside Sports’ format set the bar pretty high for talk radio and television none have matched his common sense, book sense and street sense approach to covering sports from the playground to the White House and beyond.

The hottest topic in America today is “Guns” everything else is a distant second. There are more guns in America then there are people! More people are murdered in America by guns than any other place in the world included war.

ESPN’s “Highly Questionable” host Dan Le Batard is back on air after he questioned the role of President Donald Trump and ESPN’s role as it relates to racism in America. His voice was the loudest after Trump’s followers in a campaign rally in North Carolina broke out with chants of ” Send her back” when Trump continued his cry relating to the four Democratic freshmen congresswomen, including Somalia born IIhan Omar. Earlier, Trump had tweeted and reaffirmed in pubic appearances that the four women should “Go back” to their “totally broken and crime-infested countries “, even though three are U. S. born citizens.

In the meantime, ESPN talk show host Dan Le Bartard a 50-year-old son of Cuban immigrants called the rally “un-American” and said it exposed a racial division in this country that’s being encouraged by the president.”

He also said, “ESPN doesn’t talk about what is happening unless there is some sort of weak cowardly sports angle that we run it through. This isn’t about politics its about race. There is a racial division in this country that’s being instigated by the president. It is so wrong what the president of our country is doing, trying to get reelected by dividing the masses at a time when the old white man, the old, rich white man feels oppressed being attack by minorities, black people, brown people, women—that’s who he is going after now.”

These are similar words used by NBA superstar LeBron James during his HBO special in a barbershop setting. He quickly had to eat his words and apologize to those he called, “Old NFL white men owners who were running their teams like plantations.”

The latest, the Russians are taking notes and running paid ads on social media to fan the flames of racism in America. It is “Highly Questionable” where will we go from here?

Chris Johnson is a writer and contributor to Black Men in America blog/www.blackmennamerica.com