“What a Wonderful Life” is one of my favorite holiday movies starring the great actor Jimmy Stewart. It played a role in assisting me in keeping hope alive for one the most admired DC TV anchors ever. The giving spirit is what Christmas is all about and life is the best gift ever.

When my wife Hattie and I gave our first ever Christmas toy party for needy children in 1968, we had no clue that we would be carrying on the tradition for 45 straight years without grants or loans. 2018 marks several milestones that we share, May 21st I celebrated my 80th birthday after my middle school Principal William B. Stinson predicted to my mother I would not live to get out of high school. May 21st 1971 my friend and homeboy Marvin Gaye released his classic “Whats Going On?” It is more revelant in 2018 than ever. November 30th marked our 50th wedding anniversary and December marks our 50th anniversary of our first ever Kids In Trouble toy party for needy children. You would not believe some of the folks who helped us through this 50 year journey, they became known as Santa’s Helpers!

I hope you remember DC Superior Court Judge Luke Moore and several of his colleagues that followed his lead, There were the Washington Redskins led by Roy Jefferson, Harold McLinton, Larry Brown and Ted Vactor. The Santa Helpers would include; radio and television personalities, movie stars, entertainers from the world of music and the real stars, everyday people from all walks of life. They had names like, Zack, Dog Turner, Black Danny, Bob Wayne, Norman, Phila. Jake, Slippery Jackson, Cornell, Shep, Frog, Nook, and Herman Thomas. They were all entrepreneurs and businessmen on the streets and byways of DC. Their company stores and offices were open 24/7 from far NE to far NW. They never had sales or Black Fridays. Their Masters Degrees and Phds were earned as a result of Common Sense–Street Sense–Book Sense (well read).

Their best characteristic, you could carry their WORD to the bank. They had my back come hell or high water. One summer I was on air at W-U-S-T radio broadcasting my Inside Sports talk show, and I received a threatening phone call from am irate listner. He didn’t like that I had called “The Mayor for life” Marion Barry out for being a no-show at a community meeting. The next thing I know my producer Salim Edwards is pointing behind me that a cop and another gentleman were standing in the studio hallway. I immediately took a commercial break to see what was going on. The cop I didn’t recognize but the brother with him was an old friend from my NE Parkside housing project, his name was “Frog.” The cop explains that my friend was walking down the New Hampshire NW street corridor in 90 degree heat with an overcoat on which looked suspicious and he stopped him for routine questioning. He discovered my friend was carrying an unloaded shotgun under his coat.

According to the cop my friend told him he was on the way to the radio station to meet me and we were heading south on a hunting trip after the show. The cop looked at me and I looked at my friend and I took the side of my friend. I could see that the cop was not believing either one of us but since the shotgun was unloaded no law had been broken. He gave me the gun and said, “Good hunting to you guys!” After the show my friend and I had a long talk about the shotgun. He said, “I was listening to the show when I heard some guy threaten to kick your ass, and I said not on my watch!” The ammunition for the shotgun was hidden in his underwear.

There was the one Christmas as I was preparing for one of my toy parties when another one of Santa’s Helpers Bob Wayne lengten the life span of one of DC’s most popular media anchors. Bob gave me a check the anchor had written for a drug transaction and it had nothing to do with ‘Insuffient Funds’. The check surprised me because in his profession it was all a cash and carry business.

The businessman was an admirer of the TV anchor and the work we were doing together in the community. This was an unheard of gesture on the mean streets of DC. When I presented the anchor with the check I encouraged him to get some help. He thanked me by not speaking to me for 20 years. I remember when I help save an austistic little girl who was pushed or had accidentally fallen on the subway tracks at the Potomac Avenue subway station in SE DC in 2007. TV-4 anchors Jim Vance and Doreen Gentzler covered the story, as Doreen raved about the heroic act, Jim pretended he had never heard of me. My wife was puzzled by Jim’s actions and she asked, “What was that all about.” My response, ‘I tried to save his life!’ 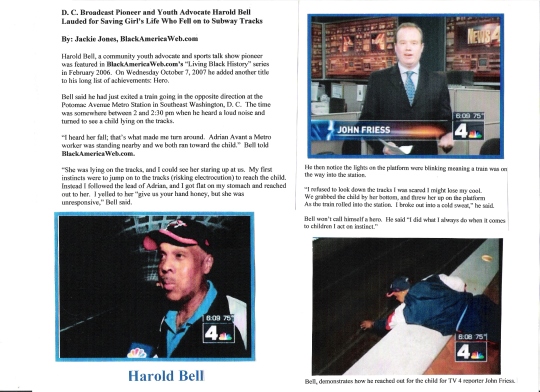 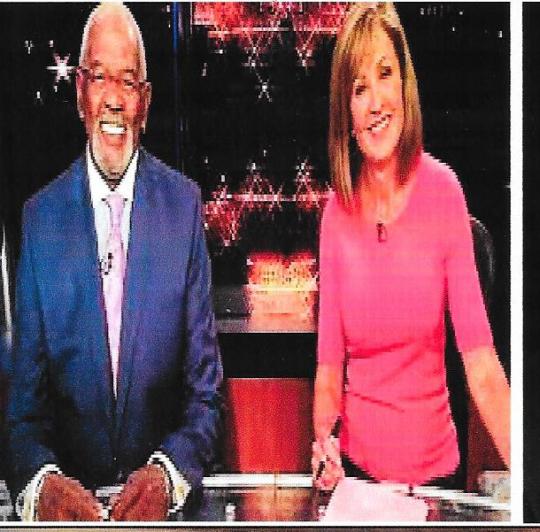 He did take my advice and enrolled in a drug rehabilitation clinic. Despite the cold shoulder given me for two-decades this was one of the best Christmas presents ever, 20 more years of his life. Even in death the gift of giving continues. Achhbishop Caroll High School’s former alumnus WUSA-TV President and GM Richard Dyer donated 5 million dollars to a new Jim Vance Media Program. The program will benefit incoming freshmen.

What makes this gift the more remarkable is that it was not from Jim’s NBC-WRC TV-4 family, the donor was a television rival–which proves you never know who is watching. His wife Kathy knows the story better than me. I cannot wait to see my favorite Christmas story “Its a Wonderful Life” because it is thanks to Santa’s Helpers and men like Richard Dyer. Merry Christmas to all.

FACE BOOK SHOUTOUTS
As a child and young man growing up in LeDroit Park specifically U & V Sts NW. you have always been someone I looked up to, a mentor, and always concerned about me staying out of troubleThank you for your guidance as I became an All American Basketball Player, a good student, and productive citizen as you know. The way you dressed and your swag got my attention because you know I wasn’t going to listen to no bama😎Glad you’re still in the game. Much love, always man! “Money”

Harold, You were born to be a spokesman and an advocate of progress. Your past radio show, demonstrated that you were active in civic affairs and sports even today! We could not begin to name all of your accomplishments! Congratulations Carl White

“You are one of the greatest that ever did it Mr. Bell and you will go down in History as such!”
Peace and love Al-Malik Farrakan