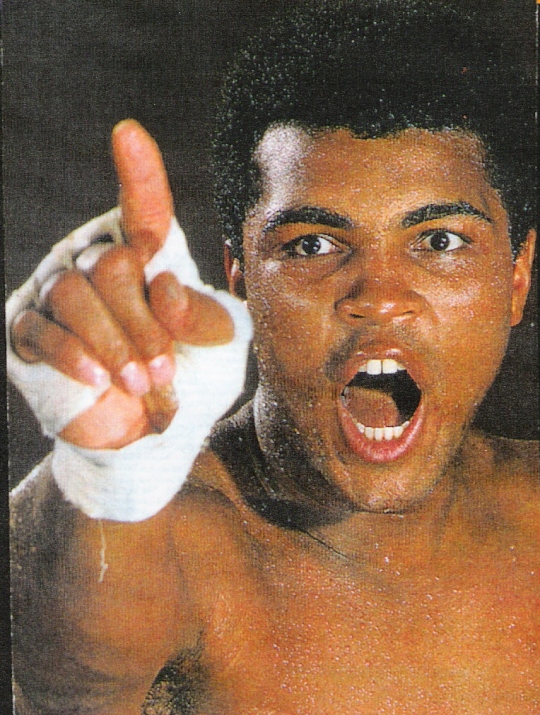 I am not surprised by the stand taken by Phil Knight and NIKE for Human Rights.
In 1977 I was hired as the first ever NIKE Sports & Marketing rep in Washington, DC. My job was to outfit the DC In-Crowd with NIKE shoes and apparel at no cost to them. The benefactors included; Jim Vance (TV 4), Petey Greene(W-O-L), Maureen Bunyan (TV 7), Fred Thomas (TV 7), Cathy Hughes and her little Alfred, (Radio One), politicians, Walter Fauntroy (D-DC), Lou Stokes (D-Ohio)and DC Superior Court Judges, Luke C. Moore, Eugene Hamilton and Harry T. Alexander. 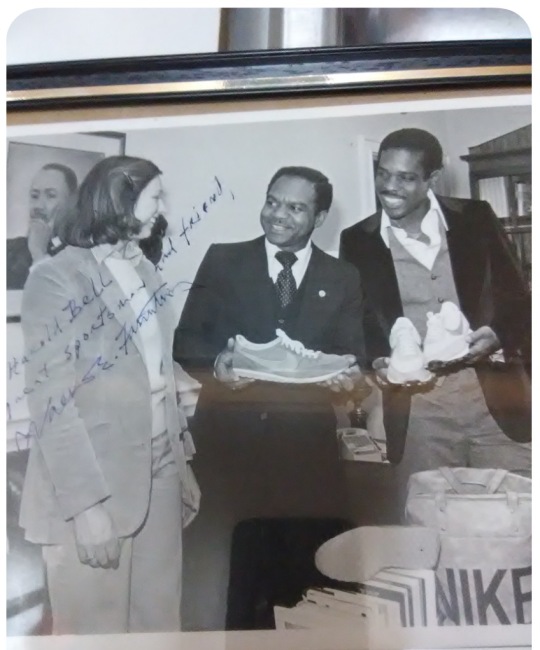 Congressman Walter Fauntroy is seen here with me in his Capital Hill office sizing up a pair of NIKES. NIKE store manager Laura looks on approvingly.

In 1977 founder Phil Knight allowed me and NIKE rep John Phillips to meet in the NBA offices in New York City to challege NBA Commissioner Larry O’Brien’s refusual to allow NBA players to participate in Reach Back Community projects.

In 1976 John had organized and took a group of NBA All-Stars to the Virgin Islands to play in a charity game for Island native Mychal Thompson. Thompson was a star player for the LA Lakers. The game was a success. When John tried to organize the game again in 1977, Commisioner O’Brien said, “Hell No!”

Phil Knight was advised and he gave John and I the green light to meet with the NBA brass in New York City. In that meeting was NBA Counsel Gary Bettman (NHL Commissioner), Executive Vice-President and former player Rod Thorn and a brother in charge of NBA Security, Horace Bordam. Commissioner O’Brien took a leave of absence he was nowhere to be found.

The meeting open with introductions around the table. John looked Rod Thorne straight in his eyes and asked, “Rod what seems to be the problem with players participating in community projects. The trip to the Virgil Islands was a success all around?” Rod Thorne was one of the good guys according to John. His response did not convince me he was a good guy. He said, “John we think that there could be problems developed from these types of community projects. Players could be hurt, and security could be another issue.” John looked at me as if to say, “Is he kidding?”

He then reminded Thorn that players have been participating in these type of All-Star Games for decades. Starting with the Sonny Hill Basketball League in Philadephia and the annual Rucker League games in New York City without serious injury or security problems! It looked like these guys just wanted to rain on our parade. Before Thorn could respond I reminded him I watched Elgin Baylor vs Wilt Chamberlain participate in one the biggest playground basketball games of all time. The game was played in NE Washington, DC in 1959 at Kelly Miller Rec Center & Playground. There were no referees, no injuries and no security problems.

To me this seem like a double standard now that NIKE wanted to do the exact same thing with NBA players like Mychal Thompson, Magic Johnson, etc who were on board to raise monies for their communities. I looked Bettman who was sitting directly across from me in his eyes and asked again, “Whats the problem?”

Bettman stood up defiantly and said, “Because we own the players!” I countered with, “Are you saying the players are your slaves?” All hell broke loose. Everyone was shouting but Horace Bordam (security) who looked very dis-interested during the proceedings didn’t say a word. Ron Thorn literally jumped on the table and said, “lets take a timeout and comeback”—they never came back. And Magic Johnson and Mychal Thompson changed their phone numbers and disappeared until the 1977 NBA season started.

NIKE was also a sponsor of my popular radio sports talk show Inside Sports. I use the show’s one of a kind format to organize Celebrity Tennis Tournaments, Fashion shows, community outings and my annual Kids In Trouble Christmas Toy Party for needy children with pro athletes from all over the country.

Bullets MVP Elvin Hayes visits Nike store in Georgetown for NIKE shoes and apparel before the 1978 World Championship tribute to the Bullets at the Hyatt Hotel on Connecticut Avenue, NW. The tribute was sponsored by NIKE!

Bullets’ player Elvin Hayes thank the fans and NIKE for their support and the great tribute. John Phillips and I look on.

NIKE hired NBA Legend Sam Jones as a rep later that year. He was all over town hustling shoes and apparel out of the trunk of his car for a dollar bill. In the meantime, Georgetown Coach John Thompson went behind my back and sold all of us out to Phil Knight.

During my time as a NIKE rep I honored my heroes, my mother and grandmother and my high school coach and savior, Dave Brown. His wife and daughter look on.

In the meantime, it took America decades to understand the position taken by Muhammad Ali when he said “Hell no I won’t go” to the U. S. Army as it related to the Viet Nam War. Ditto; the raised fist of Tommie Smith and John Carlos in the 1968 Olympic Games in Mexico City is another great example, there is no comparison. Ali, Tommie and John were dead broke. Colin walked away from the NFL a millionaire. Still I admire him for his courage.

The Greatest and I sit on the Mountain Top at his training camp in Deer Lake, Pa while his head of security Pat Patterson keeps the peace.

The protest heard around the world, sprinters Tommie Smith and John Carlos stand tall in the 1968 Olympic Games in Mexico City.

Since Trump and Colin have exploded on the American landscape some black and white folks are contradicting themselves as it relates to TRUTH and who should tell it. Thursday Night Football kicks off the NIKE/KAPERNICK ad campaign and watch the double talk begin. Phil Knight has not only upset Jerry Jones, and Donald Trump, but he has thrown the NFL players and Corporate America for a lost.

Colin Kapernick’s historic kneel with Eric Reid (cannot find a job), Michael Bennett, Richard Sherman, Malcomb Jenkins will make hundreds of present day players look like cowards. Phil Knight and NIKE will be on the right side of history—too many NFL players will be off-side and on the wrong side of history.