When the NE Patriots and the Pittsburgh Steelers meet in the NFL Play-offs in January bragging rights and a trip to the Super Bowl will be at stake. The road to the Super Bowl in the AFC will definitely go through the NE Patriots and the Pittsburgh Steelers. Former Steeler LB James Harrison is the all-time sack leader for the franchise. He will be starting the New Year with the NE Patriots who in all likelihood will be blocking the path of the Steelers to Super Bowl XXXVIII.
Harrison got his engine started on Christmas eve at outside LB against the New York Jets in Foxboro. It was just one week ago he was kicked to the curb by the Steelers. He played 14 of his 15 NFL seasons there. In social media on Friday December 29th the 39 year old Harrison held his own press conference via Instagram and said, “I asked to be released, but was repeatedly told I would play. If anybody thought I signed a two-year deal with a team in the NFL at the age of 39 to sit on the bench and collect a check and a participation trophy, they were mistaken.” He appeared in just 5 games in the 2017 season with the Steelers.
Harrison is one of my favorite players in the NFL I like his competitive and winning spirit. He reminded me of myself as an athlete, in spirit only. I was nowhere near the athlete he is, but attitude, I always took the field of play thinking I was the best—it is there we are similar.
As the season was coming to a close I watched Harrison pout and squirm on the Pittsburgh Steelers’ bench. I knew it was just a matter of time before he and Mike Tomlin would butt heads.
It is often said, “It is best to be thought a fool than to open one’s mouth and remove all doubt.” Former Steeler teammates should have taken heed. Many of Harrison’s former teammates were not too happy with him signing with their rivals in Foxboro, but he cleared that up quick and in a hurry. He said, “The Steelers made a business decision and so did I!”
One teammate LB Bud Dupree was quoted saying, “Basically you spit on your teammates, because the whole season you’ve shown yoursrlf as someone different than what you were supposed to be, a so-called leader to us. The spit Dupree was referring to was the spit aimed at the team’s head coach, Mike Tomlin and the Rooney family. He also said, “It is no one’s fault on our team why he got cut—he cut himself. He came in, and he didn’t want to do anything to make us better.” The team’s center Maurkrice Pouncey said, ‘He erased his own legacy here.’ Harrison’s legacy will outlive Pouncey’s, unless he switches positions and becomes the sack leader before his career ends in Pittsburgh.
This is where Coach Mike Tomlin missed the boat as a coach and leader. He should have called a meeting of his team and staff and reminded them, “Please no bulletin board material that the NE Patriots or Harrison can use for their next meeting in Foxboro, let your actions speak for themselves.”
The quotes coming out of the Pittsburgh locker room should be the one used by someone who is deaf (sign language). There is an old saying, “Let sleeping dogs lie!” Pro sports are overrun with liars and hypocrites, James Harris didn’t live a lie, he wanted out and his actions spoke for themselves.

The James Harrison situation hits close to home for me. I clearly remember my senior year on the basketball team at Spingarn High School in Washington, DC. The summer of 1958 I chose to spend my time on the playgrounds developing my jump shot for the upcoming campaign. My previous role, I was used as the team’s defensive stopper against our opponent’s top scorer.
The role was not glamorous enough for me I needed and wanted to see my name in the local papers. My new role didn’t sit well with my Coach Dr. William Roundtree. I was benched for selfishness (bad attitude) and then cut to make room for a member of the junior varsity. Coach Roundtree, understood if I was allowed to sit on the bench, I would be nothing short of a cancer to my teammates. Coach Roundtree made a business decision.
I transferred to our rival Eastern High School, they were in first place in our division. The Eastern Coach Bobby Hart welcomed me with open arms. Eastern was loaded with talent and I would probably have to play a secondary role. I was ready for whatever role Mr. Hart wanted me to play, but Coach Roundtree and the Spingarn administrators bust my bubble when they protested directly to Eastern against my joining the team. Mr. Hart called me into his office and reluctantly gave me the bad news, I would not be allowed to suit up against my old school. It was a business decision and I was on the short-end of business.
In 1963 my first year out of college I played minor league football for the Charleston Rockets in Charleston, West Virginia and former NFL Coach Perry Moss. I was the last WR cut and the four that made the final roster were all white. This was my first encounter with “The Race Card.” It was another business decision. My ego was a little bruised, but I made my way back home to DC and caught on with the Virginia Sailors. Here I would also have a similar encounter. The Sailors were a farm team for the NFL Washington Redskins. Again, I thought I was “The straw that stirred the drink.” My attitude, I was always open and never saw a football I could not catch. This “see me” thought pattern kept me in hot water with my coach Billy Cox (former Redskin player). 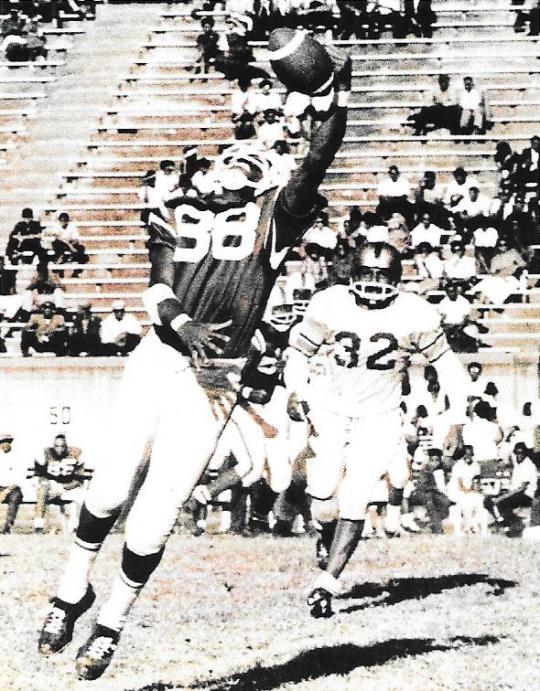 The team was very diverse the players were a good mix of both black and white. There were several guys who had played in the pros. You had to stay on your toes, because you never knew when the Redskins were going to send a player down to the club for seasoning to be called back at a later date or never. There was always the possibility that your roster spot was the one he was coming to take. The Redskins paid his salary, but our salaries were paid by the owners of the Sailors, one owner own Kay’s Jewelers. 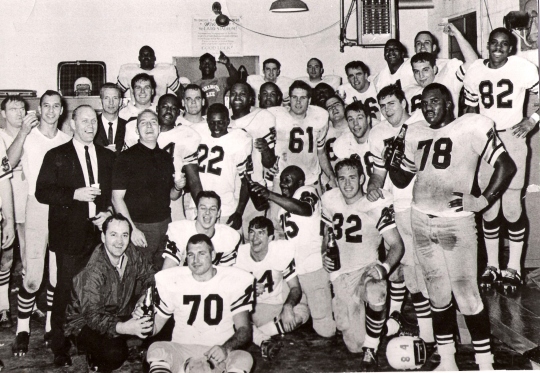 This was a group of talented players like I had never seen before. Defensive back Mike Summer played high school football at Wilson in NW DC and he had a tour with the NFL Baltimore Colts, running back Hezikia Brazton (6’3 and 240 lbs) played the entire exhibition season with Baltimore and was the last cut. NFL Hall of Fame and Baltimore Colt player Lenny Moore said, “Hezy should have made the team.” There was big defensive tackle John Cash he played with the Denver Broncos for five years. The late Earl Richards was my hero growing up in our housing project Parkside in NE DC. He was a player/coach, and played center on offense and LB on defense. He was unparalleled at both positions—he was way ahead of his time. 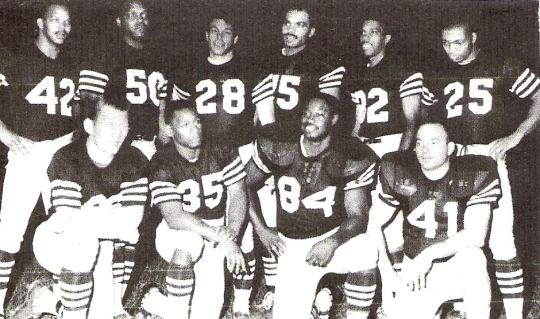 My second year with the Sailors things got real shaky racially with the team. We had tryouts in SE DC in Anacostia Park and brothers came from all over the city to tryout. I think all those brothers in the park at one time sort of shook up our white coaches. The 68 riots were still fresh on their minds. 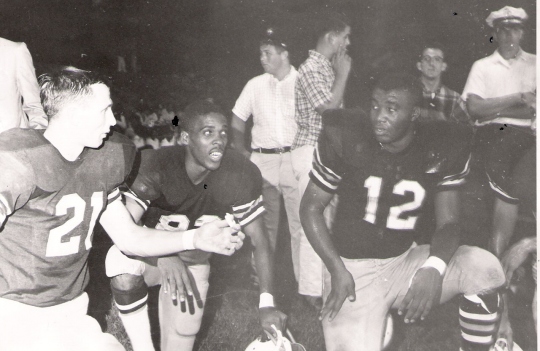 H. Rap Brown was my co-worker (Neighborhood Worker) with the United Planning Organization. One day Petey Greene (co-worker) Rap and I were walking by Harrison Playground located at 13th & V Streets, NW. There were several kids throwing a football around. Rap went inside the gate and started throwing the ball. He had the kids running pass patterns. Petey and I looked on in amazement. 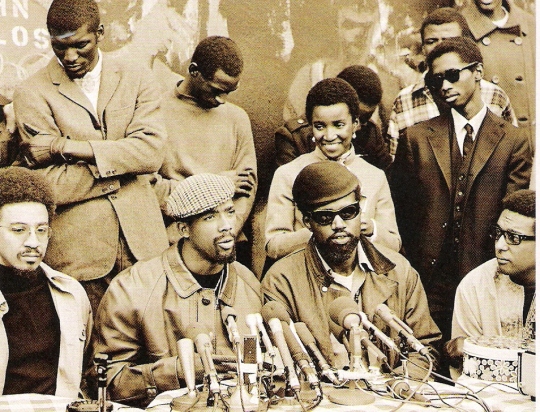 I went inside and ran several patterns to see if he was for real and he was. He threw for accuracy and had some zip on the ball. Petey challenged him to go down to Anacostia and tryout for the Sailors. Rap came down the following evening with Petey acting as his agent for practice. He wowed bystanders and scared the hell out of our white owners and coaches with his pinpoint passing while wearing sun glasses and wearing a black tam over his bush. The problem, the team already had a black QB name John Thomas out of Southern University he was a magician with a football (Russell Wilson). Another business decision and Rap was cut the next day.
During those tryouts I was wary because I knew my job was on the line because of the behind the door politics that were taking place. The Sailors were a very unique minor league team, we were the crown jewel of the league. We flew commercial airlines to away games, our lodgings were in the Holiday Inn, the food was great, our checks never bounced and stories were written about us in the Washington Post and Star newspapers.
I lost my starting position later that season for a Redskin recruit and I was made a back-up. I was not a “Happy Camper.” Whenever we needed a crucial first down, Coach Cox would holler “Bell get in there!” I was still the man, but I didn’t understand and I should have. Coach and I had a run-in and I was cut—it was a business decision. 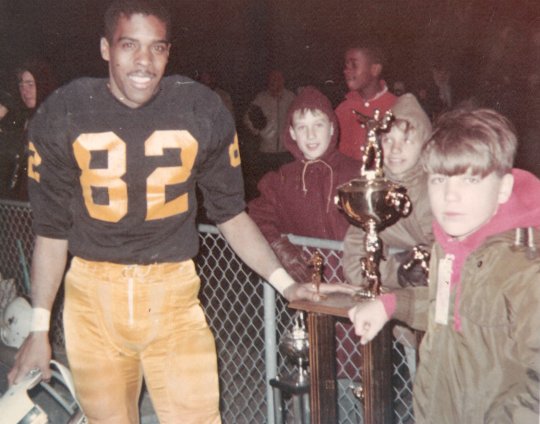 James Harrison owes the Pittsburgh Steelers absolutely nothing and he owes the NE Patriots everything as it relates to his ability to perform at the top of his game. He was all business on the field for the Patriots at his old outside linebacker position wearing his familiar number 92. He recorded two sacks and five tackles in a 26-6 victory in the regular season final home game. The Patriots clinched the top seed and home field advantage in the AFC. At the close of business on Christmas eve on a Sunday afternoon in Foxboro, it was evident that James Harrison had made a business decision that was best for his family, and his pro football career–next stop Super Bowl XXXVIII.