It is with a heavy heart that I bring the sad news of the home going of two dear friends of my wife Hattie and I.  One was a Clown and the other was an Angel. 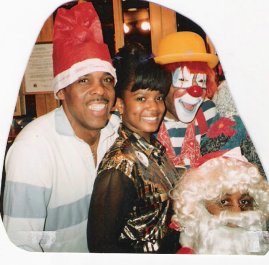 The Angel, Corrine Greene went home to be with the Lord on Saturday August 20th. Her home going service celebration was held on September 9, 2016 at the First Rock Baptist Church in S. E. DC.

Corrine was a native Washingtonian and a product of the DC Public School system, graduating from Armstrong High School and Morgan State College in Baltimore, Md. She was the loving wife of the late Joseph Greene, Jr. Corrine is survived by her only child, Kathy who is the benefactor of her mother’s attributes, classy, caring, kind, loyal, and the smile of an Angel.

I met Corrine and Joe in the late 60s through my then fiancée, Hattie Thomas. In the late 50s Hattie would leave Orangeburg, SC and spend the summers with her Aunt Justine who lived on Jackson Street, NE, directly across the street from the Greens.

Joe and I had met before Hattie and Jackson Street. I often saw him having power-lunches at Che Maurice’s, Ed Murphy’s or Face’s. They were the restaurants of the in-crowd in Washington, DC.

In 1967 I met Corrine and Joe together for the first time. I will never forget, Hattie and I were leaving her Aunt’s house and I spotted one of my high school coaches standing on the front porch of the Greens. His name was Ray Hammond. He was one of my football coaches at Spingarn High School back in the day.

Coach Hammond was the brother of Corrine. He and I clashed in the early stages of my high school Odyssey. I thought I was the straw that stirred the drink and felt everything football, basketball and baseball was to come through me. He once told me, “Harold Bell you got to change your attitude or football is going to become a spectator sport for you.”

Coach Hammond eventually got me to see things his way and he became a great mentor.

Kathy and Hattie already had a special bond from Jackson Street, but that bond became even stronger when they connected again two years ago at the SE White House.

Hattie’s mother Elease had come down with dementia and she had become her mom’s caretaker. The two shared notes, Hattie’s mother was 95 years old when she went home to be with the Lord on May 5, 2015. My mother-in-law “Mommy T” as she was known to family and friends, shared the same traits as Corrine Greene; she was a class act, caring, kind, loyal and had the smile of an Angel. Hattie T is the mirror of her mother.

The best way to sum up Corrine and Mommy T is “What you saw was what you got.” They often say ‘An apple does not fall far from the tree’, meet Kathy and Hattie.

Corrine and Mommy T’s first encounter in heaven, I would love to be a butterfly on an Angel’s wing. I bet Mommy T will be hosting “Tea for two” and somewhere during the conversation the two would look up and say, ‘Did you know my daughter?’

Fozie the Clown’s home going services were held in North Carolina on Saturday September 3, 2016. He was buried with his father who had preceded him in death two days before in Washington, DC.

Fozie aka Alphonso Pittman was an educator by trade in the DC Public Schools, he had a Masters Degree in education. Somewhere along the way he decided that the system was a joke when it came to educating our children.

He went from a three piece suit to a clown’s costume and discovered laughter was the best remedy for him to reach out to our children and make a difference.

His sleight of hand and magic tricks opened up avenues for thousands of children across the DC metropolitan region and beyond. The children and some teachers discovered that laughing could be a vehicle to learning.

Fozie was on to something, there was a recent report critical of the Prince Georges County school system from the director of Head Start at the Department of Health and Human Services. The department detailed what it called “deficiencies” by the school system to correct teacher behavior involving Head Start instructors who used humiliation and corporal punishment to discipline children as young as age 3.

The department cancelled a 6.3 million dollar contract. This action by the Department to punish hundreds of children and parents for the antics of a few, there is something wrong with this picture!

Parents and community activist have called for the resignations of the entire school board who are suppose to oversee the program, but came up a day late and 6.3 million dollars short.

The County Executive Rusherd Baker has refused to dismiss the school board. His refusing to take action against the school board begs the question, “When are our children First and who are the real clowns?”

Fozie was one of the most unselfish educators I have ever met—he didn’t just talk the talk, he walked the walk and really made children First. I was a witness.

My non-profit organization Kids In Trouble benefited from the good deeds, and support of Santa’s Helpers, like Fozie, Robin Sugar Williams, Don Baker, Zack, Philadelphia Jake, Slippery Jackson, Cornell, Nook, Black Danny, Dog Turner, who were every day people or knew how to act like them, none could hit a baseball out of the park, shoot a jump shot, or throw a football 75 yards in the air. But still they are the glue who held my community endeavors together. The common-denominator–what you saw was what you got!

This link is dedicated to Corrine, Fozie and those who are no longer with us and were never Too Tall to Stoop to Help a Child.