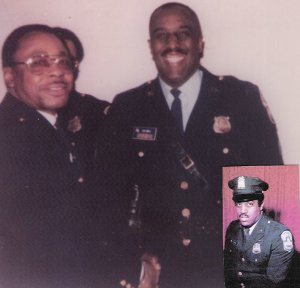 My life long friend Andrew Johnson (on your left) with Willie Wood (NFL) front and center.  We were partners in the inner-city when he was a foot patrolman.  He went on to become one of the top homicide detectives on the DCPD.  He retired from law-enforcement as a supervisor with the DEA.  He was recently profiled by a nervous white cop on Mitchellville Road claiming he spotted a crack in his windshield.  He saw the cop sitting back up in a corner off the road as he drove by.  The officer immediately pulled in behind him.  There was no way this officer could have seen a crack in his windshield as he drove by.  What he saw was a black man in a Mercedes.  The nervous cop apologize and got back in his car and pulled off.  This Cowboy Cop attitude extends from Section 8 Housing in Suitland to the Gated Community in Woodmoore.  No black person is safe or immune from these Cowboy Cops or the politicians and ministers that protect them.
My mentor was the late Luke C. Moore the first black U. S. Marshall in modern day history appointed by President Lyndon B. Johnson.  Willie Wood and I walked arm in arm with Luke during the 1968 riots on the U Street, NW corridor.  During the riots I was summoned to the 3rd District Police HQ by Assistant Chief Tilmon O’Brant.  He introduced me to his officers and then he gave me a DC police badge to allow me to pass through police and military barricades in the city.
Luke later became a DC Superior Court judge.  He encouraged and brought DC judges and P. G. County judges, William Missouri (known as the hanging judge) and Alex Williams to participate in my Kids In Trouble programs. The late  Senator Decatur Trotter (D-Prince Georges County) was another mentor.  My experiences working in the streets of the inner-city with youth gangs, at-risk children, judges, courts and with the good, bad and ugly cops are second to none in the DMV.  I know a good cop when I see and hear one!
In the late 60s former New York City Police Chief Patrick Murphy was appointed Public Safety Director of the DC Police and Fire Departments by the late Mayor, Walter Washington.  Mr. Murphy was know as the Godfather of Police and Community Relations in this country.  He met with the staff of the DC Recreation Department’s Roving Leader Program once month to help keep a pulse on youth gangs and at-risk children.  He said, “You guys are the eyes and ears of the streets.” 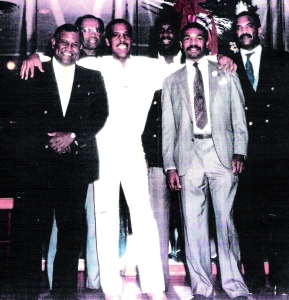 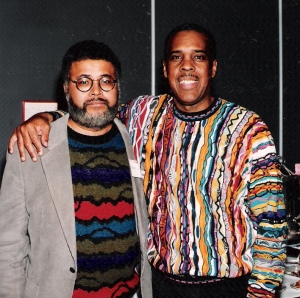 Governor Hogan you are an alumnus of DeMatha High School and I know Coach Morgan Wooten had to touch you somewhere along the way.  When I read you learned integrity from your father, that means you had the best of both worlds, because Coach Wooten is definitely a man of integrity.  He has been a great friend and supporter of Kids In Trouble and Inside Sports for decades.  You mention the name of Harold Bell and there will be no hesitation coming from him as it relates to our relationship (truly a man of integrity).

There are plenty of good cops in our community but they are outnumbered by the bullies and cowards.  In my 50 years of working in the DMV I have seen the good, bad and ugly up close and personal.  It is a sad commentary that in 2015 law-abiding residents in this county have to not only worry about, the everyday young thug, but they also have to be on the lookout for the Crips, Bloods, ISIS and some members of the PG County Police Department.  In case you have not heard, there are times in the DMV, the thug and the cop are one of the same.
When the late Patrick Murphy (NY City Top Cop) was named the Director of Public Safety for the DC Police and Fire Departments in 1967, I was by his side as a Roving Leader for the DC Recreation Department (Youth Gang Task Force).  We met once a month at Police HQ to discus ways of bringing the police and community together.  How of these type of meetings have you participated in with cops and community?

Boys in the hood and DC Cops bond by playing ball together. Coach H. Bell, Ricky Dargan and Kirby Burkes share a laugh with Officer Charles Robinson after winning city-wide softball tournament.
In the 70s and 80s I was the first media personality to bring judges, politicians, pro athletes and entertainers together to enhance the growth of our community.  I organized forums as it related to police and community relations and youth violence conferences around the DMZ to bring peace to our streets.

Jim Brown (NFL) and Congressman Tom Davis (R-Virginia) co-host Kids In Trouble Forum on Police & Community Relations
Governor Hogan, I encouraged my friends and family to vote for you, otherwise it was going to be “Business as usual” with the other candidate.  I have seen beyond, the Black and White, Republican and Democrat issue for decades.  I want the best man or woman for the job of leading this county and country.  It is not only the bad cops, I am sorry to say, but the bad politicians and ministers are a part of the problem.  They don’t have a clue, everyone is out for themselves.
Governor Hogan, I am still active in the community.  I am the Historian for the World famous Ben’s Chili Bowl chain. I mentor neighborhood youth, I host my own live radio show “Inside Washington” every Monday evening on WCLM Radio 1450 on the am dial in Richmond, Virginia.   I write blogs for Black Men in America.com and I have my own blog sites, The Original Inside Sports.com and The Original Inside Sportsmlblog.com.

Detroit FBI Director Wayne Davis and I worked the mean streets of DC during the 1968 riots
This Game Called Life in PG County is not a spectator sport and ain’t nobody playing fair when it comes to Justice & Just-Us in American courtrooms.  This brings to mind the recent shooting death of Laquan McDonald in Chicago last year.  His murder was covered-up for 13 months while his killer policed the streets of Chicago.  His police history shows this was a “Bad Cop.”   This reminds me of the cover-up of the PG County cops that were responsible for the hanging of Ronnie White in the Upper Marlboro jail before he had his day in court.  Those cops are are still patrolling our streets in PG County.  If this wasn’t reminisce of the KKK and a step back into the 30s, and 40s someone is fast to sleep.
In a recent radio interview with Congressman Hank Johnson (D-Ga 4th District), he explained to me why he had to express his disappointment with his colleagues on the House Floor as it related to the outright “War on Black Men” in America by police departments across America.  He said, “There are too many in law enforcement who would rather use their guns instead of their heads.”  This is a courageous politician/man who has decided he is no longer going along to get along.  He reminded me of another courageous black politician, Adam Clayton Powell.  Congressman Powell was a Baptist minister who represented Harlem, New York.  He became a powerful national politician for the Democratic Party.  He was a unpologetic national spokesman on civil rights and other social issues that concerned the black community (1945-71).  Today he is that courageous and unpologetic voice on Capitol Hill.

Congressman Johnson constituency base is in the 4th District of Georgia but as a native Washingtonian, he remembers the senseless police brutality of the PG County police department.  The department was under a U. S. Justice Department/FBI watch for decades.  Are we headed back there or are we still there?  In April Congressman Johnson stood on the House Floor and told his colleagues “It feels like open season on Black Men in America.” See link below.
http://politics.blog.ajc.com/2015/04/13/hank-johnson-it-feels-like-open-season-on-black-men-in-america/
Governor Hogan, I refuse to be afraid to leave my home because there are some police officers who think because he has a badge and gun it gives him the right to disrespect me and the community I live in.  The bottom-line, there are too many law-abiding residents who want their communities rid of the “Bad Guys” but not at the expense of ‘The Good Guys (law-abiding residents)’.  There has got to be a better wait.
If you think this is playing “The Race Card” I would like to invite you to traffic court in Upper Marlboro on any given Monday morning (Under Cover Boss).  The courtroom will be standing room only with black motorist outnumbering white motorist 10-1.  Something is wrong with this picture?  But evidently, by your non-response to my letter to you dated September 10, 2015 this is a non-issue to you and your administration.  We understand you have some health issues and thank God your cancer is now in remission, but you are only as good as the team that surrounds you.  Someone on your team should have responded to my letter and concerns.  This non-response sends the wrong message for those of us who voted you into office, does this mean my vote and my voice don’t count?
Or was your address to the Maryland House of Delegates right after your election a bunch of empty words?  You said, “Ladies and gentlemen, it is time to listen to Maryland’s hard working taxpayers and our job creators. The people of Maryland simply cannot afford for us to continue on the same path of more spending, more borrowing, more taxes, and politics as usual.  It is time for a new direction for Maryland.”  I am taking your Word that is what you really what you want for this county, but your actions are saying ‘Its business and politics as usual’.
In closing, we wish you nothing but the best in all your endeavors and we certainly have you in our prayers.  We are looking forward to your response as soon as your busy schedule allows.  God bless.
Sincerely,
Harold Bell
Founder of Kids In Trouble, Inc
The Original Inside Sports
240-705-3447
P. S. three months without a response from your office is not a good sign of good government for the community.  The segment on the readiness of the PG County Police Department seen on NBC-WRC-TV 4 (11-24-15) using the proper techniques to confront violence in our community is not what we are seeing with PG cops.
Contact Numbers:  Governor Larry Hogan Constituency Services 1 800 811 8336 / 410 974-3901