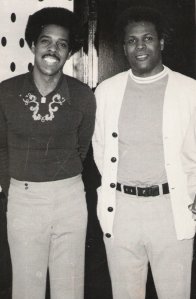 The coaches, Al Attles (top) and K. C. Jones had similar styles of play while rivals in the NBA.  Both were known for their up in your face defensive and ball handling skills and leadership qualities during their NBA careers.  K. C. won multi-NBA titles with the Boston Celtics as a player and Al won none as a player with the Philadelphia 76ers and Golden State Warriors.  In one of the most memorable played games in NBA history, Al was the second leading scorer.  It was the night the GREATEST player in the history of NBA—Wilt Chamberlain scored 100 points on the New York Knicks, Al backed him up with 18 points.

The Bullets/Wizards are forever connected.  In 1975 the Golden State Warriors led by a coach from Newark, New Jersey, one of the greatest scorers in NBA history and an unconventional owner swept the Washington Bullets in 4 straight games to win the NBA title.  The coach was Al Attles, the player Rick Barry and the owner, Franklin Mieuli.  In what was called the biggest upset in NBA history, Golden State not only defeated the heavily favored Washington Bullets but embarrassed them in four straight games.  Rick Barry was named the MVP of the finals.

It was my first time covering an NBA Championship game.  This was one of those times you wish for a tie. I was caught between a rock and a hard place. The coach of Warriors Al Attles was and old friend as was Bullets’ coach K C Jones.  NBA history was being made in the process.  Attles  and Jones would be the first two black coaches to meet in an NBA Finals.

The way they were, Al Attles and K. C. Jones, as player and coach

K C Jones and assistant Bernie Bickerstaff are seen on the bench trying to figure out what was going on.  In the meantime, Attles is seen below during a time out telling  Warrior guard Phil Smith “Don’t stop running!” 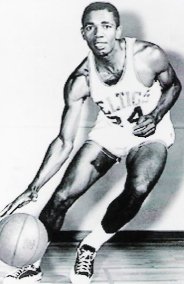 The sweep by the Warriors would cost K. C. Jones his job thanks to the “Monday Morning Quarterbacks” including Pulitzer Prize winning columnist the late Bill Raspberry of the Washington Post.  He was quoted in his column saying, “K. C. Jones and the Washington Bullets were out hustled, out played and out coached!”  Now I have seen Raspberry play basketball up close and personal and I was surprised by his arm chair analysis of a great NBA player and coach.  Bill hardly knew the difference between a left hook and a hook shot. But he got two out of three right.  The Bullets may have been out hustled and out played but never out coached.  It didn’t help that K. C. had an ambitious assistant coach in Bernie Bickerstaff who was stabbing him in the back at every opportunity.  He gave owner Abe Polin and GM Bob Ferry the ammunition needed to fire K. C. the following year.

Bickerstaff was telling everyone that he was the one really calling the shots and making basketball decisions during the season.  Yes, he could be seen during the timeouts giving instructions to the players, but only after conferring with K. C.  There was nothing insecure about K. C. Jones when it came to playing the game or coaching it.  He was a successful all around athlete in college at the University of San Francisco with teammate, Bill Russell. He was drafted by the NFL (defensive back) and the NBA, he chose the NBA where he now resides in the Hall of Fame.  Bernie was not only ambitious but he was also insecure with too many skeletons in his closet.

In 1976 the Bullets brought Dave Bing home from Detroit to see if he could provide a spark to take the Bullets back to the finals, but it didn’t happen. He spend the next two seasons with the Bullets.  He was named to the NBA All-Star game once more in 1976, this time winning the game’s MVP Award.  But he was just a shell of the great Dave Bing I knew.  Dave’s arrival could not save K. C.’s job with the Bullets and from our conversation I am not sure he wanted to.   Shortly after his arrival we were having lunch in his apartment off of Branch Avenue in Prince Georges County, Maryland.  We talked about what was wrong with the Bullets and his observation almost knocked me out of my chair.  He said ” First, K. C. is a drunk!”

My response, “Dave, K. C. has enough respect for you, he would have no problem with sitting down with you to talk about what was needed to improve team play and morale.”  He said, ‘Harold I think it is too late.’  K.C. was fired shortly after.

Earl ‘The Pearl’ Monroe goes one on one with Bing as a Washington Bullet.  Dave retired as a Boston Celtic in 1978.

Dick Motta was hired and he took the Wizards to the 1978 NBA finals and beat a great Seattle Super Sonic team coached by Lenny Wilkins in seven games.  I wanted to root for the black coach, but I could not, I remembered the sweep by the Golden State Warriors like it was yesterday.

The owner of the Washington Bullets/Wizards the late Abe Polin hugs Wes Unseld after the Bullets beat the Seattle for the NBA Championship. “The Fat Lady” had finally sung for the organization.

HBell, Red Auerbach and K. C. Jones out on the town

K. C. Jones is one of the most successful player/coaches in the NBA, second only to teammate Bill Russell.   As a player he help win 8 NBA Championships as a Boston Celtic.  He was an assistant coach on 2 NBA Championship Celtic teams.  And he was the head coach on 2 NBA Championship Celtic teams, 1983-84 and 1985-86 NBA seasons.  He lost in the finals of the 84-85 season.  This was all after he was fired by the Washington Bullets and given a second chance by his former coach and mentor, the great Arnold ‘Red’ Auerbach.

Al Attles longevity with the Golden State Warriors as a player/coach/administrator is second to none.  The best way to describe his NBA longevity is to quote former Warrior coach and now NBA television color analyst Mark Jackson, “Mama there goes that man again.”

Congratulations to the Washington Wizards for an outstanding season. They were definitely the better team in the East but the injury to starting guard John Wall was definitely a setback.  I think a match-up with Cleveland they would have stood a 50-50 chance of winning the series.  Their only problem in the Atlanta series was not just losing Wall, but their BIG men disappeared, Goitar and Nene.  The Wizards had the deepest and most talented bench in the NBA (Cleveland was a close second), but was Mismanaged by Coach Randy Wittman.  There is no way Chris Humphries their most consistent big man should have been on the bench the entire play-offs.  And I thought the trade of Andre Miller back fired, he could have been the calm during the storm.  Otto Porter’s improvement was off the charts and Paul Pierce for Mayor, “Wait until Next year.”