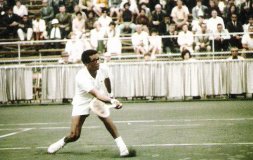 Serena Williams wins her 19th career Grand Slam and her 6th Australian Open.  She beat Maria Sharapova in straight sets. More history was made when three black female players made it to the quarter finals.  Never in Grand Slam history has this ever happen.  Serena and sister Venus and nineteen year old Madison Keys are keeping hope alive in American tennis.

There has not been a No. 1 black male tennis player since Arthur Ashe in 1971.  Where are all the black American men?

A footnote in Black History: While we celebrate Serena lets not forget Arthur and Althea  Gibson who started it all.

I remember a black Newspaper Columnist, Adrienne Washington writing, “I am still trying to figure out how our story gets told by everyone but us?”  Adrienne, What took you so long to figure that one out?  First, we don’t own any major media outlets to tell our own stories.

Our history is either being ignored or stolen while we stand idly by and do and say nothing.  The thieves are stealing our music.  The Oldie but Goodies formats are being sold out all over the country and it has gotten so bad if you spot a black face in the audience you celebrate.   The most popular rapper in America has blond hair and blue eyes–Emien.  A black jockey has not been seen at the Kentucky Derby since the 1800s. Asians have taken over the soul food market, when was the last time you saw an Afro-American own cleaners?

When I talk about stolen goods I have to look no further than ESPN’s VP Steve Walsh.  He listened to Inside Sports while working in the Style Section of the Washington Post in the 70s.  In 1978 he took the concept and format of the show and parlayed it into Inside Sports Magazine and today’s ESPN television format.  It was my fault because I didn’t trademark the name as my attorney had advised me.

I decided to separate my sports talk radio format from his magazine so I re-named my format “The Original Inside Sports!”   You would not believe he is still trying to claim ownership, in his profile on the internet he calls his magazine“The Original Inside Sports Magazine!”  He has no shame in his game! You still want to know why our history is being told by everyone but us?

In 1968 tennis legend Arthur Ashe won his First Grand Slam, the U. S. Open.  Shortly after the big win he and his good friend, business partner and Davis Cup teammate, Donald Dell were driving around Washington DC when Arthur came up with the BRAINCHILD the National Junior Tennis League (now under the umbrella of the USTA).

Arthur and Donald had just finished conducting a tennis clinic for inner-city youth at the Bannecker Recreation Center on Ga. Ave. NW.  The Rec center was located directly across the street from Historical Black College, Howard University. Despite his success Arthur had not forgotten who he was and where he came from!  He remembered the harsh reality of racism in his hometown of Richmond, Virginia.  He had to leave town just to escape racism on the tennis courts.

Shortly after the devastating riots in 1968 had torn DC apart, several blocks away at 14th & W Streets NW there was another youth works project in progress.  Kids In Trouble was designed to help rescue at-risk children in the Shaw/Cardozo community.

I was working for the DC Recreation Department in its elite Roving Leader Program (Youth Gang Task Force).  KIT was a non-profit organization and my BRAINCHILD.  The program was established to help the growth of inner-city children using recreation and tutorial programs as a vehicle.  Pro athletes were invited to be mentors.  Native Washingtonians, Dave Bing (NBA) and Willie Wood (NFL) were the first to volunteer.  Today every pro sports franchise from, Major League Baseball, NHL, NFL and NBA “Cares!”

In 1970 Arthur Ashe won his Second Grand Slam, the Australian Open.  In 1971 he won his first French Open Doubles Championship with doubles partner Marty Riessen.  Arthur was ranked the No. 1 tennis player in the world.

The idea for the title Inside Sports for my ground breaking radio talk show came from my wife, Hattie.  It was 1971 and we were having dinner one evening when he asked her to suggest a title for my new show and without hesitation she blurted out “Inside Sports.”  The airing of Inside Sports made me the first black to host and produce his own sports talk show in the Nation’s Capitol on W-O-O-K radio.

Sports talk in America would never be the same.  Long time sports columnist Dick Heller has called me “The Godfather of Sports talk—the good kind.”

In 1972 during a break in the action at the Evening Star Tennis Tournament in DC I would asked Arthur Ashe if he would come on my show for an interview, but he turned me down.  In the infancy of the tournament the media and players co-habituated in and under one tent.  We were all up close and personal.  The Media had total access to the players.

Ashe turned me down but Jimmy Connors standing nearby over heard the conversation and volunteered to be onInside Sports via telephone.  The Sunday of the show NBA legend Red Auerbach and his wife Dotie were scheduled to be my guest.  It was 15 minutes into the show and as promised Jimmy called.  Red and Dotie were unaware of my special telephone guest because I was not sure if he was really going to call.  My producer Carl Furgerson was the only one I told about the possibility of Jimmy calling into the show (he managed the phones).

When Carl signaled me that Jimmy was on the line I plugged him into the studio and said “Jimmy Connors say hello to Red and Dotie Auerbach.”  When Jimmy said ‘Hello’ Red dropped his unlit cigar out of his mouth in disbelief!  Red was a big tennis fan and during our long friendship he participated in several of my celebrity tennis tournaments.  Red took over the show and made me the guest as he and Jimmy talked tennis for next 15 minutes—I enjoyed every minute of it.

July 2013 will mark 40 years since Arthur Ashe became the first black to win the Evening Star Tennis Tournament(Legg Mason) in Washington, DC.  Covering the event at courtside was the only black sports reporter and talk show host in DC covering the event—Harold Bell.

July 2013 will also mark the summer riots of 1968 and how my good friend and head U. S. Marshall Luke Moore and I walked arm and arm with Willie Wood in the 14th Street NW cooridor trying to save lives.  It also marks the birth ofKids In Trouble.

In 1973 Inside Sports was the talk of the town and the No. 1 ranked listened to sports talk show on the airwaves!

In 1975 Arthur Ashe won his 3rd Grand Slam, the French Open beating arch-rival and nemesis the legendary Jimmy Connors in 5 sets.  In November 1975 I became the first black ever to host and produce his own sports television special on NBC television in prime time.  The show was aired on NBC affiliate WRC-TV 4 in DC prior to the Washington Redskins taking on the Oakland Raiders in Oakland.  My special guest was The Greatest, Muhammad Ali.

Today Arthur Ashe is still the only black man to be ranked No. 1 in the World and win all 3 Grand Slams. His humanitarian efforts on behalf of the less fortunate and the underdog, makes him a better human being than an athlete.

They say the greatest form of flattery is imitation; the original Inside Sports talk show format has often been imitated around the country but never duplicated.

During Black History Month 2013 I was invited to be a guest on a sports talk show on the Howard University radio station WHUR.

The host was Ricky Clemons an old friend whose sporting credentials are vast and unchallenged.  His show’s title“Sports Insider” sounded vaguely familiar!  He confessed on the air that his title for the show was inspired by the original Inside Sports.  I said ‘Why Not’ everyone else seems to have been inspired by the title for example; Inside Major League Baseball, Inside the NFL, Inside the NBA, Inside Hockey, Inside Tennis, and the political talk shows have even got in on the act with Inside Washington, etc.

The benefactors who have emerged from the shadows of Kids In Trouble and Inside Sports before their 15 minutes of fame read like a Who’s Who in media, John Thompson, James Brown, Sugar Ray Leonard, Grant Hill, Michael Wilbon, Cathy Hughes, Dave Aldridge, Adrian Dantley, Kevin Blackistone, and Adrian Branch.

American and Black Sports History will one day look back and take note that while Arthur Ashe and Harold Bell were 2 ships passing in the night in Washington, DC, they were making waves and clearing a path for our youth!