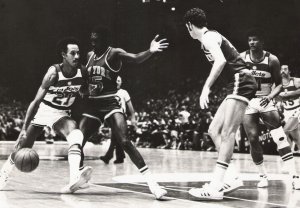 One on one with The Pearl
Dave Bing basketball camp in the Poconos
Hillcrest Saturday Program in DC
Kids In Trouble MVP
HE CARED LONG BEFORE THE NBA
In 2008 Dave Bing came back to his original hometown of Washington, DC and officially announced to friends and family he was running for Mayor of Detroit. The announcement came during a Spingarn high school class re-union in Prince Georges County, Maryland.  My question to him was, why?

It looked like he was a man that had everything. He was a NBA Hall of Fame basketball player and voted as one of the 50 Greatest Players of all time. He had money earned as a successful businessman and three daughters to take over and run the family business.

Why the headaches that come with trying revive a city on life support?

The city of Detroit was “Dead” the only thing left was for someone to start shoveling the dirt to bury it. I admit I was at a disadvantaged.

I was on the outside looking in, but still the question of why stayed on my mind. It finally hit me that Dave had made Detroit his home for the past 43 years, what did I know and when did I know it?

I made it as difficult as I could for him on the basketball court. I made sure he earned every shot he took. The playground rules were, “No harm, no foul.” We met in pick up games on the playgrounds and alumni basketball games at our alma mater Spingarn High School.

We both learned several lessons from Coach Roundtree and the lessons had nothing to do with basketball. I was one of the team’s best players in my senior year in 1958 but I was asked to turn in my uniform and enjoy the rest of the season from the stands.

My style of selfish play earned me an early exit. The lesson learned, “No one is indispensible.” Dave ran into several rough bumps in the road during his high school career also. Coach Roundtree became his savior and traffic cop in the ‘Game Called Life.’

I was there to watch and cheer Dave on as he took our alma mater to its first City Championship and was named to the All-American High School basketball team.

I watched as he took his game to the next level and I clearly remember the lesson he taught me during a summer basketball encounter at Kelly Miller. It was his junior year at Syracuse, he was serving notice he was now in charge.

I lined up in my usual position and chose to play him man to man. He jumped and shot over me and ran circles around me. When I left the court that day I felt like I had just come out of a Maytag washing machine on spin dry. His message was loud and clear “New Sheriff in Town.”

There was a slight smile of satisfaction on his face as we left the court. I never challenged Dave Bing One on One again. He made me a believer.

In 1966 he was the number one pick in the NBA draft of the Detroit Pistons. I watched the draft like a proud Big Brother. I said to no one in particular “I taught him everything he knows.” I was just joking, but I was proud that I had played a small role in his development.

I was having lunch at Frank’s a popular restaurant hangout in NW Washington in the summer of 1966. I looked up and Dave walks into the restaurant with Spingarn alumnus and my childhood friend, Arnold “Tank” George.

They came over to my table and I stood up to shake hands with both. I then congratulated Dave on an outstanding NBA season (he was named the Rookie of the Year). He then said “Harold you helped prepare me for the NBA.” I was stunned and I thought to myself, ‘What a classy thing for him to say’.

I had become cynical of homeboys like Maury Wills and Elgin Baylor forgetting who they were and where they came from. They never came back to their hometown for camps or just to visit schools to talk with young people, unless there was an emergency.

You can add to that list, John Thompson, Sugar Ray Leonard, James Brown, Adrian Branch, Adrian Dantley all came through Inside Sports and Kids In Trouble. Dave and I exchanged telephone numbers and for the next decade we would become partners in the community working together with at-risk children.

In 1967 I traveled to Baltimore for the NBA All-Star Game to ask Dave if he could come to our alma mater and speak to the students. I was then working as a Roving Leader for the DC Recreation Department.

I had been assigned to Spingarn to help quell a shooting of a Spingarn student after a basketball game. There were talks of revenge. I thought “These kids need to hear a voice of reason” and the voice was playing in the NBA All-Star Game in Baltimore, Dave Bing.

I was waiting at the player’s entrance to the Baltimore Civil Center when Dave walked up with teammate Bob Lanier. He introduced me to Bob and then asked “What’s up?” I explained the Spingarn situation and asked him if he could come to Spingarn the first thing Monday morning and speak to a full assembly.

He said, ‘No problem.’ His appearance was like the calm before the storm, the students gave him a standing ovation as he walked to the stage. It helped they had just seen him the day before on National television playing in the NBA All-Star Game.

He was representing Spingarn High School and now he stood before them. The timing was perfect, the talks of revenge subsided — the storm had passed.

During the campaign I was surprised to read Detroit newspaper reports that Dave did not relate to the community. The community involvement of professional athletes started with native Washingtonians Dave Bing and Willie Wood (NFL) in 1967 and 1968 respectively.

Despite the miles Dave stayed in touch with his hometown of Washington, DC. In 1969 I was attending a workshop on the campus of Michigan State University for the DC Recreation Department. He picked me up on campus and took me back to Detroit to help celebrate my birthday.

I know he thinks I have forgotten, I have not. He joined the Washington Bullets on the downside of his NBA career. We sit down on his arrival to discuss the negatives and positives.

He has always been there and was never more then a telephone call away.

Like most 50 year friendships, partnerships and marriages there are disagreements and conflicts. Dave and I had our share. One of the problems, Dave has been surrounded by an entourage of Player Haters, cheerleaders, wannabees and Yes Men.

The biggest enemy in our community is still envy and jealousy. There were those in that group who were envious and jealous of our strong bond and relationship. There was a communications breakdown and out of sight became out of mind.

There were several incidents that I had to address of “He say, She say.” The one that hurt the most involved our late former coach, Rev. William Roundtree. I went directly to Dave by way of written letter for clarification.

I never got a response and when we would see each other at different DC functions he would act like nothing had ever transpired. The truth can hurt sometimes. So I let go and I let God.

Despite the disagreements and harsh words said by me, Dave flew to DC during his campaign and was one of our honored guest during the Kids In Trouble, Inc 40th Annual Toy Party. Hattie and I also celebrated our 40th Wedding Anniversary on that December evening in 2008.

He received The Kids In Trouble, Inc Life Time Achievement Award in the name of our beloved late coach, Rev. William Roundtree. My success as a community and media icon would not have been possible without Dave Bing.

When you love someone you never have to say “I am sorry.”

I think Detroit got the best MAN for the job.

He CARED long before the NBA.