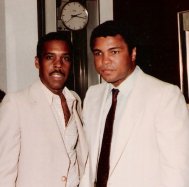 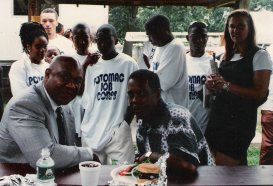 October 30, 2014 marked the 40th anniversary for The Rumble in the Jungle.  The historical fight took place in Zaire, Africa. It was there Muhammad Ali shocked and stunned the sports world with when he scored an 8th round knockout of undefeated Heavyweight Champion, George Foreman.  Ali introduced a new never seen before boxing tactic he called “The Rope a Dope.”   The dope he roped was none other then the man they called the Baddest Man on the Planet, Big George Foreman.   He would finally later admit, “Ali out thought me and he outfought me.”

The Greatest and I met in Chicago prior to the big fight.  He invited me to attend as his guest.  I turned down his invitation, I was not too thrilled about flying across all that water.  A decision I now regret.

Despite my turning down his invitation he promised me on his return back to the United States I would be the first media personality to interview him in New York City.  I will always remember how confident he was that he would return victorious.

The champ was a man of his word.  He called me after his arrival back into New York he called me in the middle of the night and gave me the green light to head on up to the Big Apple.  The interview was held in his hotel room overlooking Central Park.

My producer Rodney Brown and cameraman Wil Williams would accompany me on this historical journey.  On our arrival in the hotel lobby I called the room number he had given me.  He answered the phone and said, “Come on up!”  He opened the door while combing his hair and said “What I tell you boy, I am the Greatest.”  We all started laughing–he was right again.

In the best interview I have ever seen Ali give.  He talks about controversy, friendship, truth, the innocent of a little child, the difference between a boxer and a fighter, The White House and self-sufficency.  He closes the show talking about his commitment to the Nation of Islam.

The interview is captured in the video titled, “The Legends of Inside Sports.”  Its one of a kind.  This is the Greatest being the Greatest as he talks about The Game Called Life.  Forty years later the topics are still relevant.

The interview is one of a kind there is nothing like it in the market place.  In 2007 a group out of New York brought the rights to Ali’s name and likeness for 50 million dollars and 20% of the monies generated from advertising.  It was a great deal for the champ because of his age and failing health.

My interview is distinguished by his left black eye and it was not for sale.  The champ never allows anyone to interview him with marks on his pretty face.  If you ever see any parts of my interview with Ali and he has a black eye–you will know it is my interview with the champ in November of 1974.  The interview made its debut on NBC affiliate WRC-TV 4 in Washington, DC in November 1975.  The entire interview It has not been seen since. Stay tune.